January 21st is my real birthday. That's when I celebrate with cake or a nice meal out or treat myself to some extra alone time, depending on my needs and wants that day, but every April, I give thanks for coming out of a bad case of meningitis alive. There's no specific day or candles or goodies; I just note the month and remember how fragile life can be and how quickly things can change. This month I did things differently, though, and treated myself to something nice.

I recently found out that someone was posting things publicly about me, unkind and personal things, like my unlisted address where I rent a room in Boulder and snide comments about me being a whiner or something. I only saw two of these posts. Apparently there are more. Both that I saw were pointed out to me by a third party, and I wasn't able to find those or any others in searches. Since these things are posted where few people look or care, I'm not concerned. I asked a lawyer about it. Posting someone's private address is a violation for which anyone can be sued, but I don't want to spend the money unless this gets to a point where it's truly threatening or harassment. I'm lucky I'm not dealing with "the Blog Stalker" or anything more terrible. Still, it's an annoyance I'd rather not have to address. The lawyer I contacted is aware, and that road is always an option. My thought about people who do this type of thing is that it shows more about their character than mine.

Someone close to me is dealing with a person who is on an unrelenting, mad quest to spread lies and defame him, and that case seems far more serious to me. It concerns me more, because the aggressor's reality seems to be so skewed. Every time I hear or see more that goes on in this situation, my jaw drops further to the ground. It's one of those things I will never, ever understand, even though I suspect there's a lot of projection going on, which is a common response when things don't go as one hoped in life. Still, it's unsettling that this person's behavior is escalating. Many months before things got out of hand, I told the one dealing with this situation to go to the police to at least file a report. I was floored when the other person went there first with false claims and a list of lies, but as shocked as I was, I should have known that things like this happen. I just didn't think I'd ever see it up close.

Unfortunately, the courts often get tied up with shit like this. When you see a case that involves real threats and possible physical harm or, in the case of a close friend of mine, actual life-threatening violence, these online stalker-like cases look trivial, but when the minor ones are dragged out for months or even years with the same and worsening behavior, it starts to get a little bit scary, even from the sidelines. Unfortunately, the more someone attacks and attempts to disrupt the lives of others, the harder it is to sit back and take it, which was the advice I used to always give. Don't respond. Don't engage. But when things continue to go too far, it's hard to keep saying that. Legal action or, at minimum, responding looks more and more appealing, just to hopefully put an end to things. Fortunately, this isn't my mess to deal with, though it hurts to watch someone I care about have to face it. For both parties, I wish it would stop.

That aside, at times my blog is more of a journal, but I started it knowing I wanted to help others. The struggles I face show that despite dealing with a life-threatening illness (two of them, actually) and minor injuries and general setbacks and an incredible amount of pain, I still show up for life with something to offer others. I work. I spend more time as a mentor in a few online forums than I do offering advice here, and I will be starting a support group of my own next month. I also recently got reconnected to the Humane Society of Boulder where I used to volunteer. It's time to start up again after a break, so I will begin in a new department in May.

My blog sometimes ends up being a good place to vent when I want to prevent the thoughts in my head from doing a continuous loop, and I'm OK with that, even when others might see me as whining. Not long ago, I mentioned that I often forget to post when things are going really well, but I'm working on that. I look at a lot of my ramblings as a way to process when shit gets heavy. And through it all, I keep a commitment to my recovery from a disorder that kills more people than any other mental illness. Make fun of that if you will, but that's on you, not me.

To celebrate April, I made an impulse purchase and got myself a cruiser bike, on sale. It's pink, and it's fucking awesome. 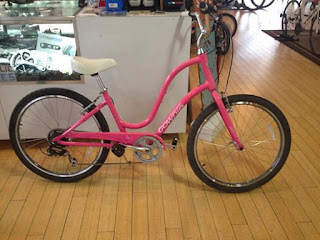 A woman has to be intelligent, have charm, a sense of humor, and be kind. It's the same qualities I require from a man. -- Catherine Deneuve
Posted by Lize Brittin at 9:42 AM