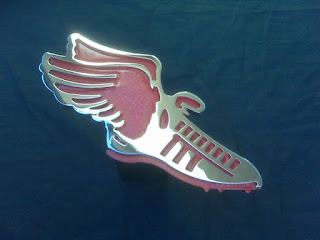 For years now, I have missed out on one part of the pre-race ritual, putting on racing flats. I never wore them in workouts in high school. Some people wear them any time the pace is faster than a jog. It was too risky for me to strap my feet into lightweight footwear, because I was a bit injury prone. As a result, I only wore them in races. My high school coach kept me in either training shoes or racing flats, period.  Eventually, my college coach coaxed me into my first pair of spikes. I think I wore them a total of two times, once for the the regional race and again at nationals in cross-country. I sort of miss being able to switch shoes before races. More than liking the idea of something to give me an edge when running faster, being stuck in clunky training shoes is a reminder that I'm not 100 percent and will never really be. That said, I am doing everything I can to cope with the imbalance. Despite feeling slightly wobbly and lopsided as I make my way around the track or pick up the pace in a race, I consider what I am doing running, RUNNING. I'll take the tape and heavy shoes in races, because I don't think I could really run without them. Everyone has to deal with issues. All I need to do is keep moving forward, right? This fall, I might try some new healing techniques. I'll give more details when I find out more.

Disappointment fell on me hard at the track yesterday morning. I could not seem to get my legs to to turn over while attempting a few 400/800 sets. Meanwhile, another lady there was blowing through a million 200's, looking like a petite version of the terminator. I was slightly embarrassed that I was lumbering around the track, feeling like 7-minute pace was a huge effort. Running is a different sport for me these days. Long ago, my goal was to run as fast as possible. My new goal is to move in a forward direction as fast as I can without breaking. There's a HUGE difference in this kind of running. It's kind of the equivalent of consuming as much liquid as possible through a straw with holes in it. It works, but the results are limited.

Running is not the same activity it once was for me, but running in general has also changed a huge amount since the 80's, when I started. There are all kinds of new training methods, more information on how to recover and improvements in equipment. One thing that I have thought about more lately is how many runners are doping, but that's nothing new. Years ago I met an ultra girl who used something to improve her performance, even though she was new to the semi-elite scene. Some friends and I used to joke about the need for different kinds of races, those for users and those for regular people, but people would probably cheat anyway. It did make me wonder exactly how many runners who aren't even in the elite category use, but that's an aside, a topic that deserves a full post some day.

Back to the track...

My biggest problem, form issues aside, is not knowing pace. My other problem is simply being slow. I don't know if it's because I was tired yesterday or getting too much in my head, but I could not seem to break out of a pace that was just under 7-minute miles, even when I told myself to "let 'er rip!" Well, I didn't actually tell myself that, but I did attempt to get my legs going faster. Strange that my heart and lungs feel OK at that pace, but my body seems to be struggling. Solo workouts when things are not going too smoothly are not much fun. I'm not sure if having someone there would have been helpful, but I seem to need something I'm not getting at the moment. Sigh.

More later. I've been doing a few interviews for a project I'm working on, and I will have much to share down the road.
Posted by Lize Brittin at 9:39 AM