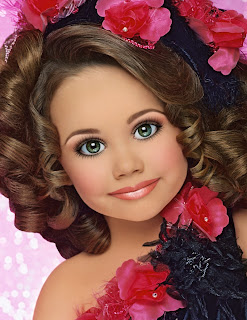 The first time I ended up seeing the show Toddlers and Tiaras, I was randomly flipping through channels on the T.V. and accidentally landed on it. I had no intention of actually watching the program, but my jaw immediately fell to the floor when a kid on the episode that was on, who was probably 5-years old, dressed in far too many frills, waddled onto the stage and started shaking her tiny butt, as if she were trying to imitate Shakira. It was a little bit disturbing, and it got worse as older kids with more provocative clothing took turns getting on the stage, each one dancing while taking cues from moms and fans in the audience. The whole show is one big train wreck that's hard to ignore. Immediately, I experienced a sense of "this isn't right," but I was in such a state of shock that I couldn't quite put words to why it seemed so absurd. Were these kids just having fun? It didn't look that way. For a brief moment, I thought Toddlers and Tiaras might be another one of those morally dumbfounding occurrences, but the more I thought about it, the more reasons why the show is so very wrong floated to the surface. I'm sure there are probably families who do these kinds of competitions in a healthy and enjoyable way, but that's definitely not what's portrayed in the episode or clips I watched, and it doesn't stop me with wanting to share what I feel is so damaging about these kinds of events. Apparently, Anonymous agrees with me, and I bet we're not alone:


The first thing that's obvious, not only in Toddlers and Tiaras but in general, is that more and more, girls are being forced to grow up too quickly. It's also true that puberty it hitting girls at earlier ages, and it's not unheard of for girls as young as seven and eight years old to start maturing. According to one study, about 15% of American girls get their periods by age seven. Does this mean we should support the trend of adult merchandise geared toward children? Of course not. Stripper poles, padded and push-up bras, virgin waxing, Playboy school supplies, French Lingerie and thongs for kids sold before these girls even know what sexual feelings are all about is not a good idea. In fact, it's pretty upsetting that this happens. There's a creepy factor in pushing girls into being objectified before they can understand what it all means. These products go way beyond dress-up. I don't think anyone has a problem with little boys and girls wearing costumes or dressing in their parent's clothes. There's no objectification or disturbing implication in playing, and this kind of activity is not usually done with a mostly adult audience watching.


Whenever looking at these controversial topics, it's important to consider what messages are being sent to young boys and girls.


In an odd twist of irony, one mother who basically taught her kid to act the part of a hooker then got angry and sued a gossip site for objectifying her daughter. Um, didn't you just force her into that position?
http://abovethelaw.com/2012/01/mother-of-toddlers-tiaras-star-sues-for-millions-after-daughter-is-sexualized-on-the-web/ 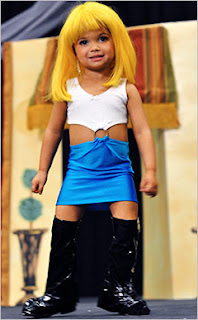 Another upsetting aspect of the show is the typical family dynamic portrayed. Most of the families shown have a spineless father who goes along with everything the mother of the prima donna says with a soft, "yes dear," even when the mother is barking orders at the guy. There's the star, a daughter who gets pretty much everything she wants, mostly so she will perform. In doing so, these kids develop an over-inflated ego with ever more attention showered on them for all the wrong reasons. The focus is on how they're dressed and their looks, which is odd considering that they are forced to strive for a look that isn't even real with fake teeth, overly tanned skin, contacts, fake eye lashes, tattooed eye liner, loads and loads of make-up and inappropriate clothing. If any siblings exist in the family, they are either used to help support the mother's obsession of having a daughter crowned Ultimate Grand Supreme or ignored. Then there is the mother...


Stand back. I've got some shit to say here. Yes, I don't have kids, so who am I to talk? Still, I know enough about psychology to make some judgement calls, so I'm going to go for it now. Keep in mind, the following conclusions are mostly based on my impressions after watching Toddlers and Tiaras. I can't say for sure, but I would guess that there are a few people who would probably argue with what I have to say.


First let me state that all kids will naturally feel the urge to compete, and this can be a good thing. However, these pageants are not natural. What is apparent is that most of the mothers depicted on the show scream a strange combination of low self-esteem and sham confidence. They are clearly making an effort to live vicariously through their daughters. Instead of teaching these young girls about what true beauty is, the girls are taught to compete by flaunting their fake looks. Is it really any wonder that so many young ladies have body image issues and struggle with eating disorders? Nobody in these settings is taught that you don't need to look perfect in order to succeed. These people have no idea what true beauty is, because their identities are wrapped up in images created by pageant society. Really, it all comes down to money. These mothers spend lord knows how much money on dresses, costumes, beauty products, coaches, entry fees and props, so of course the pageant community wants these competitions to continue. Unfortunately, the mothers are completely unable to show any kind of good sportsmanship or good sense, unless their daughter is the undisputed winner.


In this ego-driven clan, it's not uncommon to see a pageant mother throw a real tantrum and go absolutely bonkers, because her daughter only won some lesser crown or because a lock of her daughter's hair was out of place. GOOD GOD, STOP THE SHOW! MY DAUGHTER'S SHOE HAS COME UNTIED! OH WHY, OH WHY? THIS IS IT. SHE WILL LOSE!!! THE JUDGES ARE AGAINST HER, AND IT MUST HAVE BEEN A CONSPIRACY. WAAAAAA!!! Well, the girls are the ones who throw the real tantrums, and people in Bhutan can probably hear the screams of little plastic lassies whose mini corsets are a tad too tight. However, nobody in these shows seems to be able to focus on anything more important or consider how their behavior might affect others. Again, it comes back to the messages being sent to children and to those watching these kinds of shows, which isn't a good one.

Somehow these pageants reflect all that's wrong with this country. There's greed, a winner-take-all mentality and the pressure to be like everyone else in the group. Supposedly the little ones are judged on their personalties, but only if they fit in with what's acceptable in the beauty queen world. In other words, be yourself as long as you follow specific guidelines and look a certain way. Sometimes I can't quite put my finger on why I get an upset stomach, feel repulsed and recoil when I see these kinds of competitions, but then it becomes more clear when videos like the one below emerge.

In addition to a video of one mother waxing the eyebrows of her 5-year-old daughter who screamed in both fear and pain, I found this little gem:

Coming in August, Here Comes Honey Boo! I really don't know what to say about this. Hey, at least she's a tiny bit outside the norm when it comes to beauty queens.

Is it just me or would anyone else prefer spending time with the main character in Little Miss Sunshine over any other contestants? 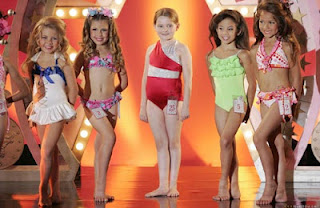 Why can't we teach little girls that they are OK the way they are?
Posted by Lize Brittin at 4:13 PM