Why Calling a Woman a Slut is Bad

I feel a rant coming on. Actually, I have had several rants bubbling inside me since some strange occurrences have presented themselves. For one, I see more and more how people's online behavior doesn't match their true-life identities. You know the types: the girl who posts a million images with quotes about compassion who is anything but considerate, or the guy who posts about how to be a great friend when he is too obsessed with posting to actually be one. Well, this rant is unrelated to that. It's also unrelated to the disgusting behavior of Warren Jeffs that was recently explored in a made-for-TV movie, nor does it relate to Erykah Badu's foolish attempt to be funny by trying to "steal" a kiss from a reporter, though these two events could make interesting blog post topics. For example, imagine if it had been a man trying to sneak a kiss from a female reporter instead of Erykah acting like a twit. That would have ruffled some feathers. I find it odd that many are claiming it was cute or funny when the reporter was clearly annoyed, upset even, with her antics, as he should have been.

I'll skip or save those issues for another time. Right now I'm fired up about something else.

Here's an example of one of the many outfits Maggie has worn on the track:


To me it looks like what she wears might be on the eccentric side, but I don't see a problem with it. I'm not sure why wearing something flashy or eye catching or different translates into her being immoral or sleazy. Athletes spend a lot of time in workout clothing, so what's so horrible about adding a little fashion? If it's not to your liking, why not simply say you don't like her outfit or admit it's something you wouldn't wear instead of going one step further by attacking her character and making assumptions about who she is? Does this outfit that she wears on the track make you think she's lurking around, waiting to do something shady? Please tell me how wearing colorful, sometimes odd costumes that often have more material than her competitors' makes her look slutty. Does anyone think what she wears is offensive? I just can't understand the fuss.

When I was at BYU, our team was one of the first to wear those one-piece uniforms. As far as I know, people didn't call us sluts, because, you know, we were on the BYU team. Instead they stared, pointed and maybe even laughed, but nobody called us names. That's rare in these kinds of situations.

There's a double standard when it comes to men and what they choose to wear. You could see two men in a race, one wearing one of those awful one-sided thongs and the other wearing running shorts, but it's highly unlikely anyone would call the one in the thong a slut or man-whore. Sure, people might scratch their heads or laugh, but they probably wouldn't call the guy a slut. I should add that a man being called a man-whore doesn't have quite the negative connotation that a woman being called a slut does.


Probably one of the most upsetting comments came from a woman who said that with people like Maggie dressing the way she does, it's no wonder why MEN don't respect her. Well, that's a stretch. So far, I haven't seen or heard about any men commenting in ways that suggest they disrespect her or any other woman for their choice in running attire, not in my circle of friends at least, though I'm sure it happens. Why a person is treated with respect shouldn't depend on what that person chooses to wear. That's just shy of claiming women deserve what they get for wearing what they want.

I get that we are all products of our messed up society, and cutting down others has sort of become the norm. Still, it's unkind to call someone a slut based solely on how she dresses, especially when what the person is wearing is no more revealing than the people around her. What Maggie's competitors wear doesn't automatically make them more moral simply because they are not as loud.

What ends up happening with these kinds of ridiculous comments is that they reinforce an idea that women can never get it right. If they don't fit an extremely narrow definition of beauty and what's acceptable, they are up for attack. If they slip a little bit outside the norm, all hell breaks loose, so rein them in at every corner. If a lady is too showy she's a slut. If she's too pretty she's a bitch. When she's too good at something she's a snob, and when she's too smart she's ugly or a nerd.

We can't win, because someone always has to attempt to take us down a notch. We can't celebrate the beauty (inner or outer) and success of a woman, because our society has brainwashed us into thinking a woman can only be a certain way, and that way is limited. You have to keep it down and not attract attention while still being pretty and successful without being a slut, overly sexual or more successful than a man. Shit. Just try to figure all that out. Fuck it all that this is 2014, and we are still living like we just put one foot back in the 50s. And for fuck's sake, SMILE!

Some men claim that because women cut down and criticize other women, none of this is their problem. Sure, women make comments about other women, but who set the standard? Does anyone think it was actually other women? Did women insist all women be subservient to men in their religion? Did women drive the fashion and beauty trends in years past? With no women board members in the largest media companies, in big corporations or in the fashion industry in the very recent past, it's pretty impressive that we supposedly had such power. Wow. We exert way more influence than I ever realized. No, the reality is that, as much as some people want to blame women for everything, even their own inequality, women are definitely a product of this society and have only recently started to do something about it. Well, some have. In the end, we need to realize that putting women down for what they wear doesn't help anyone or accomplish anything.

BTW, Maggie finished fourth in her 800-meter race. She was wearing a fun one piece, but who cares? She ran a fucking 2:00!
Posted by Lize Brittin at 11:29 PM 2 comments

I wrote a blog post, and the internet ate it. I hate when that happens. I keep going back to where the post should be, half expecting it to turn up, but deep down I know it really won't be there. I had to start over. Just as I was writing the intro, the cursor jumped from the end of the sentence to the start, which made an interesting jumble of words, but nothing that made any sense. I also have two key caps missing and several sticky keys on this computer. First-world problems, for sure, but annoying nonetheless.

Normally I steer clear of even suggesting what or how people should eat. I can't stand when people try to dictate my eating habits, so I avoid telling people what's best for them. The worst is when someone insists that juicing, cleanses, fasts or some random fad diet is the way to go. I don't mind when someone suggests trying a certain meal, eating more of this or that, or eating X before or after doing Y activity. That doesn't bother me, but when people insist that the Paleo diet or Keto diet or what the fuck ever diet is the best thing ever and solves all the problems of the world, it makes me want to poke my eardrums out and roll my eyes to the point where they get stuck all up in the back of my head somewhere.

That said, I do think it's important to be as aware as we possibly can when it comes to what we eat, and that should include researching specific ingredients as well as looking at labels.

I've been on a documentary-watching rampage. So far, the list includes: Chasing Ice (amazing), Inequality for All (very well done), Food Inc. (just as shocking the second time around), God Loves Uganda (incredibly disturbing), Exit Through the Gift Shop (interesting), Unhung Hero (great) and Zeitgeist (eye-opening, even if it's not 100 % accurate).

I encourage people to watch all of these, but since I'm on the topic of eating, Food Inc. stands out among them. This and any other films or lectures dealing with food, farming, GMOs, labeling or monopolies, such as Monsanto, in the food industry should be a documentary-watching priority.

Here's a short video clip from the movie, Food Inc., in which one farmer, whose contract with Purdue was terminated when she refused to close off the open windows on her chicken farm at the request of the company, talks about factory farming:

She has since moved on to practice humane and free-range farming methods on her own farm.

And here's a short video on marketing relating to farming that will also make you sick: http://www.upworthy.com/no-one-applauds-this-woman-because-theyre-too-creeped-out-at-themselves-to-put-their-hands-together?g=2&c=ufb1

While I'm on the topic of being sick, this one about three young wannabe models may be unrelated, but it will also turn your stomach: http://www.upworthy.com/a-news-team-follows-potential-models-for-one-week-my-face-is-now-stuck-in-disgust-mode-3?g=2&c=reccon1

Boulder gets a bad rap for people being extra picky about organic food and following the hippie lifestyle, but most of them aren't even aware that their eating habits are a good thing when it comes to making a statement that we don't want animals, even ones we may end up eating, to be treated in horrific ways. For companies, it comes down to supply, demand and profit. That's it. Very, very few companies actually care. You might be surprised that companies such as Burt's Bees, Kashi and a bunch of other "natural" businesses are owned by PepisiCo Inc., and none of them give a shit about GMO labeling, your health or animals. Maybe when they started they did, but that's no longer the case.


With the corporate consolidation of organic companies, it's go big or get out of the way, so many smaller family-run business are pushed out of the ring. That's why it's important to support companies who are the real deal, companies that support GMO labeling, are family owned and care about more than just turning a profit.

While I'm on the topic of Boulder, people come here, complaining about the selfish, opportunistic, self-serving crowd and then act like assholes to show just how unlike us they are, but I suppose they do have a point. People do seem to be a little on the self righteous side here. Still, Boulder can be a cool place to live. I like that people here are unique, and whether or not they know it, the people here are making at least a small statement about how the food industry should be by being fussy about what they consume.

As you probably realize, supporting change doesn't mean simply walking into Whole Foods and buying whatever they're pushing, far from it. It means educating yourself about the products, how they are made and what goes into each step before the product lands on a shelf.

For more ways you can help, visit this link: http://www.aspca.org/fight-cruelty/farm-animal-cruelty/10-ways-you-can-fight-factory-farms

Posted by Lize Brittin at 7:33 AM 0 comments

60% off Training on Empty

I'm offering 60% off my book, Training on Empty ! Use this coupon code: KR34B at the following link:https://www.smashwords.com/books/view/243502 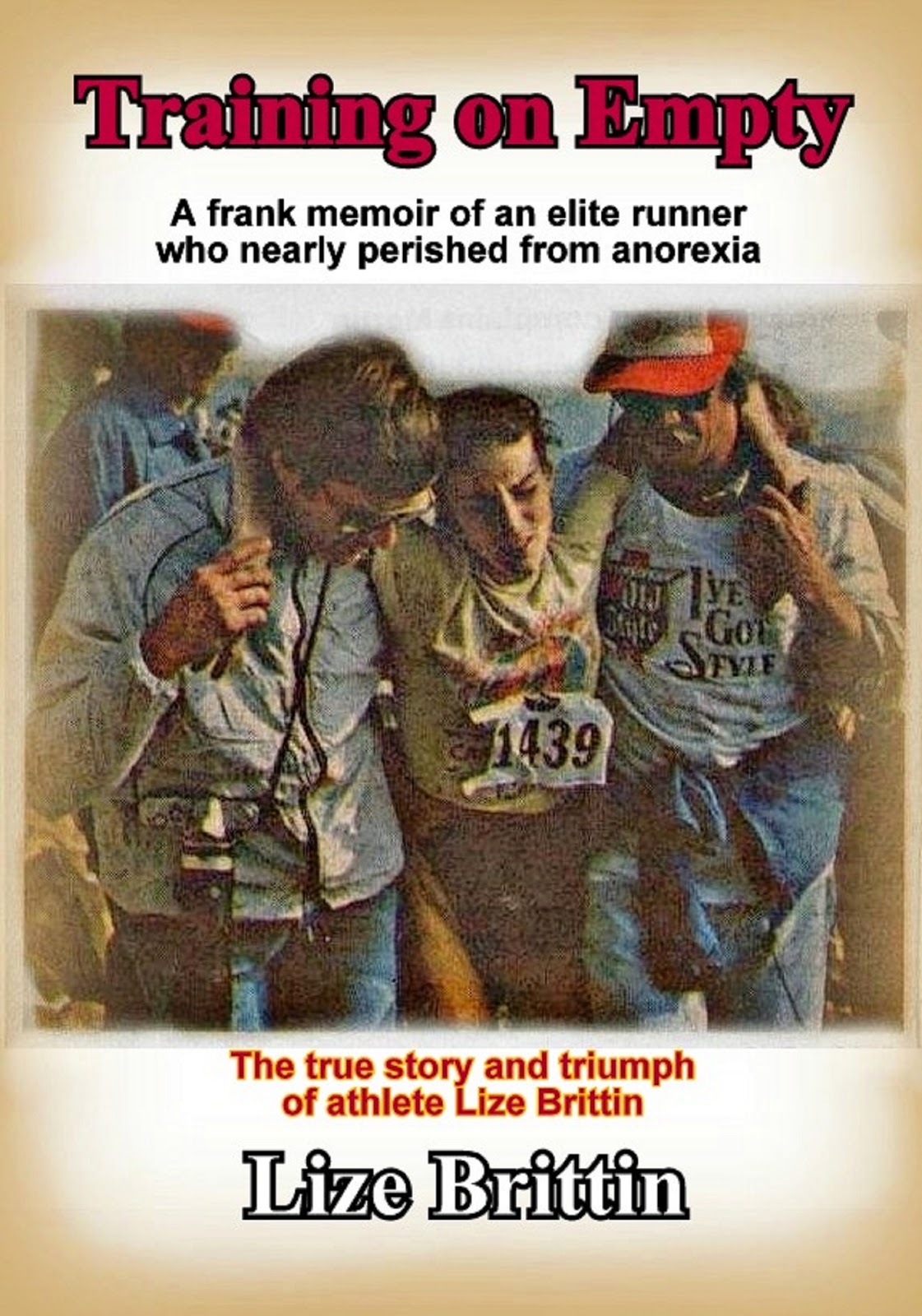