I've been repeatedly ridiculed by a particular person in the last few years. I don't really know her and don't care to, yet I'm affected by her creepy online behavior. As much as I hate dedicating parts of my blog to what looks like childish bullshit on the surface when I do write, blogging often helps me process.

I've always been one who wants the world to operate under some kind of "Do the Right Thing" rule, and in most cases, doing the right thing isn't all that complicated to figure out. Most people know right from wrong. In some cases, the right action is clear, but there's an obstacle that inhibits the right outcome. That's what I consider normal, but in rare cases, people are just assholes or mentally ill and can't help but inflict their misery onto others.

It's never my goal to harm anyone, but if you fuck with me or worse, my friends, I'm not going to take it lightly. I have a tendency to be far too nice up to a point, but when someone keeps needling me or the people I care about, I will eventually react. I was much too kind in this blog post about someone who has presented herself as an obsessive stalker and continues to play fucking games because she's completely unable to either address whatever is going on in her mind directly or let go of whatever made-up bullshit grudge she has against pretty much all the people who ever tried to help her or were nice to her, me included. If you want the long sordid but true story, start here: http://www.kemibe.com/kimduclos.htm

I can't imagine going through life like that, just constantly lashing out at people, creating fake identities and constantly lying. How do people like this sleep at night? I'm familiar with having regrets, but I've never hounded people for things I imagined or pretended they did. Hell, given the way I was treated when I was young, I'd say I've done a pretty good job of forgiving and moving on. This woman appears to be completely incapable, and I can't imagine how anyone can look at the way she behaves and be OK with it. I'm certainly not.

I've been along for this nightmare of a ride since it started, since the first time she attempted to meddle in my relationship and lied about me. I witnessed her outbursts on Facebook when her former coach decided he had enough of her antics and nonpayment and cut her off, and I was at a hearing after she filed a false police report when a judge strongly suggested she fucking stop "trying to make Mr. Beck look like a bad person" online, which, of course, she didn't. What I don't understand is how anyone who has clearly been abusive could claim she's a victim, which is her latest trick.

That's the worst thing about all of this now, that she's pretending to be the victim of abuse of some sort after starting all of this. She's posting in various Reddit groups giving obvious clues that it's her until she eventually gets banned or booted for saying bizarre or obviously false things that rarely have anything to do with the theme of the forum. It makes me physically ill to see her pretending to be a target of any kind of misconduct and offer "advice" as a way to promote her lies. Why was this kind of abuse never brought up in the hearing? Because she was never anyone's prey. Though this post isn't what I call nice, it's accurate. Anyone who thinks it's unkind should imagine having someone attack you and your friends for years on end, and then ask yourself if you could continue to ignore it as the ugly behavior escalates.

You would think that someone who gets banned and whose comments get deleted in Reddit groups would at least take a break, but nope! After being booted from one group recently after making very unsettling comments that appear to be targeting me, she's already posting in another group, still pretending to be a victim. This is all a lot of blah blah to people who don't know the details of the saga, but normal people don't say the kinds of things she does. Normal people, even ones who truly are hurt, eventually get a fucking grip and stop irrationally lashing out at others. Because she said she could basically fuck with me (something she seems fond of doing and even threatened to do with her boyfriend's parents at one time) by going to my place of work, I'm more than a little concerned, not because of what she would say --my boss is like family to me and knows me extremely well -- but because of what someone this unhinged could potentially DO. I mean, this is really messed up, and I can't believe it's still going on with her. Over what? Over fucking what?

You might ask why put this out there. It's because people like her don't stop, ever. They obsess and try to manipulate and orchestrate, even if their plans look ridiculous. Below are three different versions of something she posted before she got kicked out of a narcissistic abuse group on Reddit. Having a relative with severe BPD, I'm familiar with "N abuse". Notice her controlling and manipulative language. There are a few things Kim needs to know that I will state clearly here:

1. I will never, ever go out for tea or meet you in person unless I'm forced to in a courtroom, and in that case, you can trust that I will be there prepared for whatever nonsense you attempt to hurl my way.

2. Kevin is not an abuser and has addressed his past openly, and I wasn't posting in that forum because of him, period. I consider him my best friend, and he has been there for me in ways very few people have throughout the time I have known him.

3. The more you play the troll, the worse you look. I beg you to get whatever help you need to stop harassing and trying to manipulate others.

4. I don't hate my job and have always said how grateful I am to be working in a beautiful place with people who are like family to me. If you try anything at my place of employment, you will have to deal directly with the owners and their lawyers.

5. Obviously, if moderators and everyone else can see through your bullshit, maybe it's time to stop, just fucking stop already.

Kim has tried to convince others that she's the author of neither these anonymous attacks that always look the same nor the ones behind her own Twitter account but only when what's posted is really shitty. When she switches from genuine asshole to everything's all unicorns farting rainbows, then she wants everyone to believe it's her again. Because she has posted volumes of awful comments about Kevin, me, Brad, people in Boulder, my mom, those with eating disorders, the homeless, women who march for various causes, former running partners, pretty much all of Kevin's ex-girlfriends, and people with addictions, I'm only posting a very, very small sampling of what's out there. And because she has a special kind of venom for Kevin's former girlfriends, my guess is that she made some assumptions about their relationship.

I want people to know exactly what she's doing and has been doing over the years. I doubt there will ever be any real justice, but I can at least let people know what kind of person this woman is and how much she has lied and lashed out at me and other innocent people. Yes, I could look away, but I won't anymore. I did that for years, and it only seemed to encourage her to become more savage. I want it all out there. Sitting back and doing nothing feels worse so I will address this as much as I feel necessary. 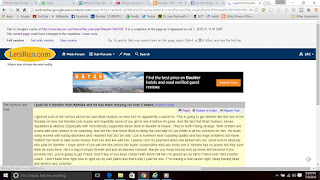 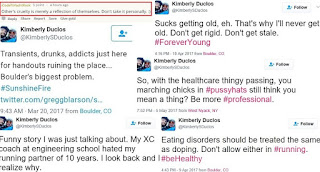 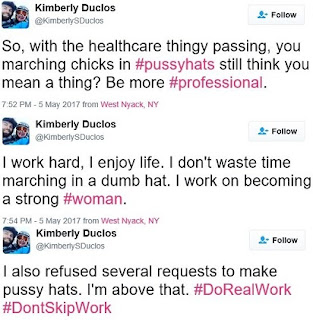 ETA:
You can listen to audio clips from the hearing that demonstrate that Kim lied countless times after filing a false police report:
https://chimprefuge.com/2018/11/20/adventures-in-courtroom-lying-part-3-kim-duclos-tries-to-defend-a-demonstrably-false-allegation-audio/
Posted by Lize Brittin at 2:51 PM 5 comments

If anyone would like to read my recovery handbook for free, you can create a free account on Smashwords and use this coupon until Oct 31st, 2018: LJ57U https://www.smashwords.com/books/view/730896
Posted by Lize Brittin at 10:08 PM 0 comments