Lately, for the life of me, I can't seem to string together a coherent or interesting sentence. It's not so much that my interest in writing has waned; it's more that I become paralyzed by my limitations. And I'm tired. I'm questioning my grammar every step of the way, and I'm in a fog so deep that I seem to be making errors everywhere I type. It's probably no surprise to anyone that my vocabulary is not and never has been that of Cormac McCarthy or David Foster Wallace, and I'm often so afraid of fucking up in some way that my writing ends up rigid and plain. In all art, if you can look at writing as such, proper technique is the first step to creating something of substance, but what comes from the heart is where real brilliance emerges. This is true whether you're a runner, a mathematician, musician, or painter. Technique first, creativity follows.

I'm just not there. I'm still in the corner practicing my scales. And just like I know I will never reach that wonderful moment of zen in running again, that feeling of being in the zone where pushing against the edge of what your body can handle transcends pain into a sensation of being connected and at one with the world, I will never achieve greatness in writing. I know that. On the other hand, what else am I to do? So I jog instead of run, and I allow my fingers to stumble across the keyboard, occasionally putting out content that a few people read. I suppose it's better than doing nothing. Still, it often leaves me frustrated and sad, wondering if I should bother. Perhaps I should stop comparing myself to what I used to do or what others can do and focus more on working the scales in a way that's more creative, an etude that's pleasing to the ear, so to speak, which is what my blog seems to provide, a place to work on shit.

When I first started this post a while ago -- I have a tendency to start and either not finish things or finish them much, much later --I was planning to write about my experiences after my first year in college when I transferred schools and what a wreck that whole scene was. Instead, something came up and I'm being pulled to change course. When the mood strikes, go with it, right?

I'm finally seeing more sensible takes on the topic of transgender athletes competing against women and girls. In a recent piece on LetsRun, Amby Burfoot states what I believe so many of us who don't land on one extreme or the other in the debate think when he writes the following:

All clear-thinking individuals believe that transgender women and men should receive the same social, cultural, educational, financial, etc, rights as others. Not all agree about athletic rights.

Diving deeper into the article, I appreciate that, in addition to addressing both sides of the issue fairly, Amby clarifies that Caster Semenya is not a transgender athlete. She was raised as a girl from birth. Too often, articles are misleading readers when they bring up her name and then slide right into issues related to transgender athletes. Amby very clearly makes the distinction, and it's an important one. In contrast to the thoughtful approach Amby takes is the misleading article I just mentioned written by someone who fabricates stories. In her women always have the shit end of everything article (not the real title), Lindsay Crouse pushes the false idea that anyone who supports a ban on transgender athletes competing in women's sports is transphobic. She's not the only one suggesting this and worse. This is a tactic the left often complains the far-right uses. Present one side, insist your opinion is morally superior, call anyone who disagrees names or insult them, and, above all, don't listen to or interview anyone who doesn't support your idea 100 percent.

In that same article, Crouse mentions how disappointed she is that 46 percent of women support a ban on transgender athletes but conveniently leaves out the last part of the poll that mentions athletes competing on women's sports teams. In other words, 46 percent of women polled support a ban on transgender athletes competing on women's sports teams. On social media, she pushes the same false idea that these types want a general ban on transgender athletes and are transphobic. Notice how deceptive it is to omit that last part, but lying by omission is nothing new in journalism. And people eat this shit up. They don't want a middle ground. For so many, the draw to be a fan of someone pushing this kind of dishonesty, for whatever reason, is there, and people cheer on those posting misleading content, no matter how bizarre or flat-out wrong it may be.

After bringing up transgender athletes, Crouse had this to say: 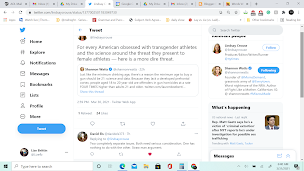 Notice how she tries to shame anyone concerned about an issue she just brought up by using the term “obsessed.” The post is just a weird way to shove one unrelated topic on top of another, but it's also another way to put down anyone who disagrees with her. Most people understand that humans can be concerned about two topics, even when one issue might be more pressing than the other. In aiming to shit on one group of individuals, those who express concern about transgender athletes competing in women's and girl's sports, she accidentally sprayed a bunch of innocent bystanders who simply follow the topic.

Crouse’s latest schtick hits a little too close to home for me to remain silent. I'll be honest and admit that I can't fucking stand any talk at all about "pandemic weight gain." I find it unproductive and generally ignore all of it when it lands in whatever social media feed I'm viewing, but the message below really rubbed me the wrong way. People joke about eating too much cheese or drinking too much beer during the shutdown, and while not funny to me and most people who have struggled with eating disorders, it's not nearly as potentially damaging as Crouse's message. This is one of several of this nature by the journalist for the New York Times, too often focusing on body size despite being part of a group suggesting sports announcers should avoid all talk about female bodies.

In addition to disregarding individualistic experience, what I find so problematic with this kind of tweet is the subtle message that being at a healthy weight is about self-control. Actually, there was no mention of health anywhere in that tweet. It's about looking a certain way, being a certain size. She's not addressing the many possible causes of weight gain during a pandemic that include depression, stress, underlying health conditions, etc. Her focus is on looks only. That's another problem and makes the tweet appear a lot worse. Anyone who has struggled with any kind of eating issue, and she admits to having done so at Harvard, should know that "control" is a loaded term. These issues are always far more complex, and maintaining a healthy weight shouldn't be a huge struggle. If it is, there's often an unaddressed underlying issue that's contributing to some form of unhappiness or unhealthy relationship with food and/or body acceptance. In general, maintaining weight isn't about willpower or control. It goes much deeper than that.

A blanket statement suggesting a lack of control is the cause of weight gain is as bad as claiming you can control an eating disorder by simply choosing to do so. I understand what she is trying to say and am not saying gaining weight is necessarily the result of an eating disorder. What I'm saying is that there's a difference between understanding and addressing the behaviors that lead a person to be at a certain weight and simply aiming to control your weight with blunt force without addressing any psychological aspects or issues around body acceptance, size, and weight. The latter is usually a recipe for disaster. If weight maintenance really were simply about showing more control and ignoring the emotional ties humans have to food and the other reasons why people overeat or restrict, fewer people would struggle. Can you see why it's upsetting when people blurt out statements without much thought?

What I believe she meant to say is that energy spent on looking a certain way -- and you could apply this to anything from applying makeup and dyeing your hair to dieting and lifting weights -- could be better spent elsewhere, and it might be freeing to let go of it all. But the message she is actually sending is warped and twisted in such a way as to shame anyone who has issues with weight. She suggests it's OK to gain weight but also implies that doing so is because of a lack of self-control. In this same scenario, those who do spend time working on themselves to be a certain size are frowned upon for spending too much time and energy on themselves. It's kind of a no-win situation she's presenting. There's also a valid point to be made in response to Crouse's take that if you need all kinds of self-control to stay at a certain size, it might be a size that's not right or not healthy for your body. Ultimately, though, decisions around weight and size should be left to the individual and her doctors and therapists, not people on the Internet. There's no right or wrong way to get through a pandemic no matter what your size or shape or appearance.

Above all, remember that my experience will not be the same as yours. Plenty of people had no trouble moving about and adapting to a new routine or keeping an old one during the pandemic, and there shouldn't be any judgment around those who were affected one way or another. Surviving is the main goal, so however people manage shouldn't be of concern to anyone else. If it took reduced exercise and more comfort food, that's fine. If it took more exercise and eating more vegetables, that's fine, too. You do you, as they say. In general, we should show more compassion to everyone no matter what weight or body struggles people are facing. Who cares about someone else going up a size as long as they are healthy and comfortable with it? That should be the message and may have been had she not messed it up by throwing in assumptions about control.

I think people blindly like certain posts without thinking too hard about what they're really saying or how they might affect certain groups of individuals. In general, maybe a tweet like Crouse's wouldn't be so bad, but this is coming from someone who, not that long ago, wrote about a young woman who had an eating disorder. Her audience, I would assume, is made up of people who might be sensitive to this kind of comment.

Now, why spend time picking apart random articles and posts? Because it matters what people say, especially those with a large following on social media who pretend to be advocates for any number of causes. What a journalist posts should be a lot more accurate and well thought out than what someone in the general public posts. It matters because people often take someone with credentials seriously and assume articles and posts are well-researched, not misleading blurbs intended to generate likes.