There's a lady who has all the good intentions in the world who tells me I have gained weight every time I see her. I mean EVERY fucking time she says it. I think she must mean well, but it always makes me feel like I've swallowed a rock as my stomach sinks and my head spins. I never know how to respond. I might start saying something like, "Oh yeah! I've put on 25 pounds by eating a few tubs of mayo with every meal and snickers bars for dessert." I don't know if I have gained weight since she last saw me, but I don't want to think about it. Blah.


This next part is unrelated, but it has been on my mind quite a bit lately.


I once read an odd book about time. In this book was one of the best analogies about senses I have ever come across in literature. It referred to humans and our limited ability to perceive as being like a spider in a web who can only sense the web. There's a whole world beyond the web, but the spider is confined only to that web. His world is that web, though he has some slight sense of the world beyond it. The web is attached to a tree maybe or created in some bushes, but the web is where he spends most of his time.


Can you imagine how overstimulating it would be if we could sense everything to a higher degree than we do- see all of the color spectrum, hear all the different frequencies and smell with the accuracy and intensity of a macrosomatic animal? It would be overwhelming. Time is something different though. Though some believe that time is an illusion, we all still have a vague sense of time. Our sense of time varies too. I hesitate to say it's all relative, because that tends to make people think I'm referring to the relativistic interpretation of time brought to everyone's attention by Einstein. I'm not talking about physical time here and don't have a lot to say about the differences between Newtonian time or constant time and the special theory of relativity. That might get too complicated. I'm focused more on that odd sensation that time drags when you're not having fun.


Everyone has had those runs or even moments in an interval or race where a minute feels like 10...or 20..or an eternity. In my case, they usually occur when I'm tired, hurting of feeling off in some way. This occurs at work sometimes too when that last hour drags on forEVER! (There's also this odd 5 minute rule where, no matter what closing time is, people will flock in the doors 5 minutes before closing time.) In order to get through these sluggish moments, I often disassociate. In contrast, there are these wonderful moments that fly by too quickly. These generally happen when I'm in the moment, enjoying myself and not wanting the experience to end. What my mom and I found though is that there's a third time called hospital time. It's much harder to define, because it seems to combine both the time flies theory and the opposite into a mess of Alison in Wonderland type experiences. In other words, time drags by in the moment, but flies over the days. I think it's mostly related to the pain killers. After a shot of Dilaudid, time just whizzes by in a rush of comfort, but as the effects of the drug begin to wear off,  time s  l   o   w       s    d        o        w                         n.


Hum. I don't know where I was going with this. I have used some of these concepts in a novel I started a few years back. I'm thinking I need to start working on that again.


I took a few days off the foot and biked.The Dr. gave me the OK to go for a test run today. I can tell that the cortisone didn't help the joint pain, but I should be able to control that fairly well with inserts. It will be interesting to see how the nerve and muscle spasm stuff respond. I'm kind of nervous! AAK!


What I really wanted to focus on was a comment that someone said that worried me. It was a friend of a friend type thing, so I hope I got the details right. Something similar was said to me, so I know it's not an isolated thought. I'm sure others have has a taste of this kind of thing as well. It has to do with someone reaching out and saying he might be a little bit bulimic. Of course, anyone who has studied addiction will tell you that there's no such thing as being "a little bit" addicted to anything. It's the one time when black and white thinking is accurate. Just like with being pregnant, it's either you are or you aren't, so when someone says something like this, I assume it's because they want help but are afraid to admit that it's a problem or are afraid to change or think that they have more control over it than they do.


Because I have lived with addiction and know what it's like to be at rock bottom, I also know what it's like to be somewhere in between- not down in it and not anywhere close to healthy. It's an easy place to get stuck. You're not sick but you're not well-to slightly alter some lyrics here. It's easy to dupe yourself into thinking that throwing up or starving or over-training a few times a week is OK, because so-and-so does it daily and this person or that person does it multiple times a day. It's foolish to think that way, but it soothes the conflict of both wanting to be better and wanting to stay sick. Staying sick always serves some need in us. There's a reason why so many people are addicted to one thing or another, living in limbo. The key is to define what it is that keeps us sick. What reward do we get out of staying sick? Is it not taking responsibility? Is it avoiding pain, sorrow or the past? There is always an answer to this question, because addiction, while causing misery, still has a draw strong enough to keep people from escaping it.


Usually when someone voices some concern about being a little bit bulimic or only binge drinking on the weekends, they are searching for a reaction, something to give them a clue about how others will react to what they are doing, because while they may not be ready to stop, they are either looking for someone to agree that it's no big deal or someone to tell them-give them permission- to stop. Deep down they know it's not healthy, but they need some kind of outside confirmation. If they get overly defensive with a response that solidifies their fears that they really are heading down the wrong path, chances are they are in denial. This happens quite a lot with anorexics who will ask advice but then not take it. We're a stubborn bunch. I still catch myself on this one.


Wow. I'm totally rambling. I'll have to finish these thoughts another time.


I want to let everyone know that SmithKlein Gallery on the Pearl Street Mall will be hosting an awareness night for Boulder Youth Body Alliance this Friday evening from 6-8PM, so stop by to learn more about this fantastic group! 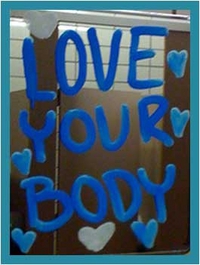 "BYBA was founded in 2004 by Carmen Cool, MA, LPC after meeting a group of passionate high school youth who wanted to do something about the issue of eating problems and body dissatisfaction in their school. These teens, many of whom had personally struggled with their own body image or eating disorder, felt helpless as they watched their peers engage in unhealthy behaviors to drop a dress size before prom, and angry at how pervasive negative self-talk is in their school. After years of working as a therapist with eating issues and body image concerns, along with the untimely death of her sister to anorexia, Carmen longed to create a place where youth could support each other. Instead of trying to change their bodies to meet externally imposed standards of beauty, she helped youth to engage in activities that build self-esteem.

Since then BYBA has directly trained more than one hundred high school students as leaders, to enhance their own body esteem and self-acceptance, and to support their peers. They, in turn, have provided education to nearly 7,000 students, teachers and members of their communities."
Posted by Lize Brittin at 9:02 AM