My creative juices are dehydrated at the moment. I'm in one of those periods in which I can't string together two coherent sentences unless they look like something found in a Dick and Jane book. I'm going to attempt to get out of my rut, but sometimes writing is really a struggle for me. Apologies for not putting as much effort as I should into my blog posts lately. 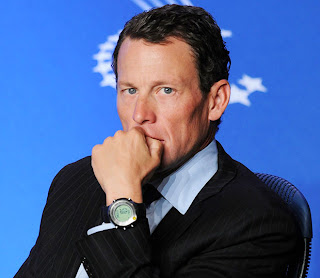 It was impossible to avoid talk of the Lance interview. People seem to be reacting strongly to the news, even though the information coming out is about as shocking as describing the sky as blue. Those who are outraged have every right to be. I don't quite understand the others who somehow feel the need to defend him in any way. He comes off as such a self-serving prick that it's hard to feel anything other than disgust for him, though I try to at least understand what he was facing when he made the many poor decisions he did. As far as this idea that he somehow changed how people think about cancer, people in the Stanground movement should not forget all the non-profits and people working daily to increase cancer awareness and raise money -- money that actually goes directly to the cause -- people like Joanna Blakeman who has been working tirelessly since her son died of a rare form of cancer years ago. If the cheater gave you some personal inspiration, that's great, but don't assume he did a ton for cancer research when there are people dedicated to doing just that and do it without recognition.

I don't think I can address the circus better than Lauren did in her post here: Lauren's open letter to lance. To be honest, I'm just not that interested in the guy. I did sneak a few peeks at the big O interview, but all I got out of it was this feeling that Lance can't seem to fully take responsibility for his actions or admit that what he did was truly shady. Sounding like a more arrogant version of a certain someone who didn't inhale, he dribbled out some statements about how he only took a little bit (as if that makes doping any less of a crime) and went into the literal definition of cheating (Ya cheated, lance. Admit it. Stop with the fucking parsing and admit that what you did was wrong.) In the end, he rationalized a lot and tried to make it sound like the rest of us are being too judgmental without quite getting the big picture of why people are so upset.

By the way, Lance, you weren't exactly accurate with your definition of of cheating. I know you desperately wanted to make it look like others are too stupid to understand what the word means, but, as with many words, there are several definitions. In fact, I didn't find your definition in any of the dictionaries I checked. You may want to believe that the word is limited to being defined as a person taking an unfair advantage over others, but there's more to it than that.
Be sure to note #2 in this entry. Oh Hell, just look more closely at all of them:

to defraud; swindle: He cheated her out of her inheritance.
2.

to deceive; influence by fraud: He cheated us into believing him a hero.
3.

to elude; deprive of something expected: He cheated the law by suicide.
verb (used without object)

to practice fraud or deceit: She cheats without regrets.
5.

to violate rules or regulations: He cheats at cards.
6.

to take an examination or test in a dishonest way, as by improper access to answers.
7.

Informal. to be sexually unfaithful (often followed by on  ): Her husband knew she had been cheating allalong. He cheated on his wife.

I'm pretty sick of the whole brouhaha. I don't want to listen to more whining about how Lance is a product of the "Win at all costs" system, or how much it must hurt that poor little lost Lance has fallen from hero status. I agree with Lauren that cheaters should be faced with something more than a slap on the wrist when they are caught. Suspend the assholes for life and make the ban bleed into all competitive sports, not just the one in which they were caught. There's no room in true sports for cheaters....or so I like to tell myself.

This shit makes me grumpy.

In other news, I started the day one year older. Breakfast included some samples of dessert followed by a nap. I'm heading out for a run in the sunshine soon, and I think I'm going to try sneaking beans into another recipe later. The weekend was pretty fucking sweet and ended with a yummy dinner at a great little Thai restaurant in Boulder. God, I love spicy food. It has been a good string of days celebrating.