Gz posted a video addressing the Western States 100 the other day. While I like the video and even admit that I got a little goosebumpy, I kept wondering where all the women are. Shouldn't someone create a video featuring the female competitors in this race and interview their boyfriends?


Ultras are a bit foreign to me. It hurts my brain to try to imagine running that many miles in one sitting. I've had plenty of friends who have completed ultras, and I've even known a few who have done well in them. I used to train with two guys and one woman who have all completed the Leadville 100, something I have no desire to do in my lilfetime.

Let's take a very brief look at just a few of the hardcore women in running. Most people think of Roberta Gibb and Katherine Switzer as the two ladies who made it all happen. What people fail to realize is that, while these two ladies were paramount in throwing distance running for women into the spotlight, women have been doing it for a long, long time. I'm not at all discounting the extraordinary courage and achievements of these women, but I'd like to make it a point to not leave out those who were opening doors long before these two made their debuts. Being a mountain runner, I naturally look to Arlene Pieper, the first woman to run the Pikes Peak marathon, as a role model. Actually, by completing the race, Arlene became the first woman on record to officially complete a U. S. marathon. That was in 1959, eight years before Katherine Switzer ran Boston. Marie-Louise Ledru is know as the first woman to ever race a marathon, but there were women long before her who were going the distance. In fact, in 1896, Melpomene, a Greek lady, ran the Olympic marathon course unofficially in a time of 4:30.


Though Anita Ortiz is considered more of a mountain runner, that is not her only forte. I was once in a race that she won in Colorado. I saw her at the start, and that was about it. My descents completely suck, so by the time I figured out how to get down the first big, muddy and steep, slippery hill, she was many, many minutes ahead of me and continued to stretch that lead throughout the race. During her career, she has been named the US Woman's Mountain Running Champion and placed 11th in the World Mountain Running Championships. As a masters runner, she won the Mountain Running World Champion and was voted the USATF Female Masters Mountain Runner of the Year. With all these incredible achievements, she is now proving to be an outstanding ultra runner as well. She was the 1st female and 9th overall at the Western States 100 in 2009.

Donna Perkins- In the Kettle Moraine 100, Donna became the first woman to win a 100 mile trail race overall. Back in my angry, I hate men days, I always wanted to win a race outright. I came in 3rd a few times, and I just missed out on the top 15 overall at Pikes, but I never won a race overall. Donna also did some impressive 50-100 mile races during her career. She was the first female in the Glacial Trail 50 mile in 2003, and also won the women's division in both the Jed Smith 100KM race and the Sunmart Texass Trails 50 mile race in the 90's.

Ann Trason - Ann is the goddess of ultra running. During her career, she set over 10 course records. I was lucky enough to see her run at the Leadville 100 one year when I was supposed to pace someone over Hope pass. They guy ended up dropping out of the race, so, being all carbo loaded and nowhere to go, I drove to Colorado Springs to run the Pikes Peak marathon the next day instead. My goal was to run to the top and drop out, because I wasn't ready for the downhills. The only problem was that I ended up in 2nd place at the top with everyone cheering that I could catch the leader. Someone put a shiny blanket thingy around me, stuck a banana in my hand and turned me around, gently shoving me down the trail. In a moment of complete irrationality, I thought, "maybe I can catch her!" So, like a fool, I attempted the descent, and promptly blew out my knee. I hobbled to the finish, dropping to 11th place. Stopping on that mountain means you probably have to wait around for a donkey ride down, or suck it up and get yourself either back to the top or down to the bottom. I had no intention of being carried out of there, so I limped, still attempting to run as I crossed the finish line. Anyway, at mile 50 of the Leadville race, Ann looked like she was running mile 3 of a 10K. That girl can MOVE! She set a course record at Leadville in 1994. Then two years in a row, she ran back to back ultras winning both the Western States 100 and also the comrades marathon in South Africa, which is actually 56 miles. Trason won the Western States 100 an unprecedented 14 times and set the course record for women, running the race in 1994 in a time of 17:37:51.

Krissy Moehl - Krissy started out running the 800. It's no surprise that she's hardcore. I find the 800 to be one of the toughest races, because it's high speed at a distance that doesn't lend itself to settling into a pace. While many ultra runners thrive on huge mileage, Krissy does better on a more sensible plan of 60 to 70 miles a week with some cross training thrown into the mix. Get her to the start line though, and there's no doubt that this lady can get the job done in even the most grueling races. She has won the Hardrock 100, among other ultras, and set a course record in both that race and the Hurt 100 in Hawaii. I have to add too that Krissy is involved in a program called "Girls on the Run" which focuses on teens looking at their own self-worth, choosing healthy lifestyles, and accepting a healthy body image through running.

There are quite a few more, including but not limited to Pam Reed, who became the first person to complete a 300-mile run without sleep, beating out Dean Karnazes in the process;  Diana Finkel, who won the Hardrock 100 3 times;  Lisa Smith-Batchen, the only American to win the marathon des sables; Lisa Tamati, who completed the Badwater Ultra; Jenn Shelton; Margaret Smith; and Diane Van Deren, all incredible ultra athletes wo have accomplished far more than most people could even imagine.


God, there's something so sexy about women who are tough and put it on the line. Karen O, will you marry me? 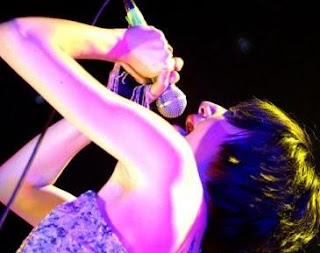