It's time to stop making race plans. It seems the minute I make them, something catastrophic happens. Well, for me, getting sick is a bit of a tragedy. This time I had my eye on a fun little race that seemed almost perfect for me. The only drawback was that there weren't any big hills on the course. Still, the race is a 10K on soft surfaces scheduled later in the morning on Saturday - nice! And then, without warning, I end up in the hospital Wednesday night. Actually, it was Thursday morning, but close enough.

Fortunately, my running partner persuaded me to go to the hospital and was available to take me. I don't think I could have gotten myself there with this kind of pain in my abdomen. For a moment, I was convinced an angry alien was trying to claw its way out of me. I'm overwhelmed with guilt though, because we hit a rabbit on the way over, and despite this being a clear case of a suicidal animal sprinting from out of nowhere directly into the headlights, it felt like some kind of ominous sign foretelling more bad things to come. Either that or it really was one of those fluke accidents that just sort of happens. Either way, I am still feeling bad that the rabbit was hit.


The whole time I was in the hospital, I kept thinking (besides how the hell am I going to pay for this?), "I wonder if I can get out and go for a run Thursday." There were all kinds of delays, even after the diagnosis of a possible ruptured ovarian cyst was given and I started to feel better. Of course the Dilaudid haze was wonderful early on when the pain was at least an 8 out of 10 on the frowy face scale. Actually, I did cry, which looks like that puts me at a 9 or 10 on the scale, but it was a combination of not wanting to go to the hospital and the pain, not just the pain. Man, that rush of feeling that everything is just fine after the Dilaudid is injected into the IV is something else. Because no cyst was actually found, only fluid in my belly that is usually the result of when those things rupture, they couldn't be sure it really was a cyst, even though all the nurses were convinced it was. I ended up having to be admitted to a room, where I watched The Price is Right and at least one other bad, daytime television show. There wasn't even a magazine around to read. I also slept. I can't believe how much I slept yesterday, and I'm still tired! When I finally did get out, I eventually put my running gear on, only to slowly walk-stagger at an incredibly sow pace to the top of the street and back. That was it, no run at all.


I'm still lacking energy today. It's as if someone slipped some scrambled tranquilizers into my breakfast. I honestly feel like I could sleep all day. Sigh. A friend of mine is convinced this is due to a lack of chocolate. She might be right. I'm not even a full month into my 3 months of no chocolate, and I'm already wishing I would have bailed. Now it's too late. It's like getting into a workout not feeling great, but knowing you're already committed. There's no stopping now, even with the temptation of some fine chocolates from Belgium. Carob doesn't cut it, but I did find some carob confections that are a step above what I've had in the past. Somehow adding coconut oil to anything results in a total upgrade. That's really all I can see that is different about these carob treats compared to others. These have coconut oil in them, and somehow that makes them SO MUCH BETTER. It's still not chocolate-not even close, but they're actually kind of good. Still, carob doesn't satisfy me as much as chocolate. I feel like I'm walking around missing something in my life. It's chocolate. It's not the same rush as a bit of Dilaudid, but it does make my brain go, "ahhhh." Carob doesn't quite do that. I found these treats at both Alfalfa's and the Boulder Bookstore. 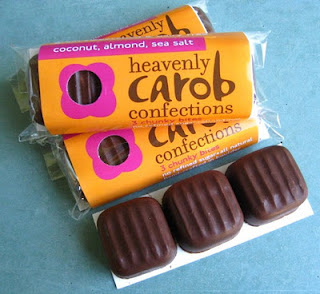 Check it out: Heavenly Carob Confections.

So no more planning races, at least for a little bit. If one jumps out at me, I'm not going to make any definite plans to run. I can't afford another illness right now, literally!

OK, wish me luck. I'm about to carry my throbbing head out the door for a little jog. I hope this time I can actually jog and also get past the top of the street.

AND OMG! LEFTTURNREALFAST- I found a store that carries little ficelles ! As I have said before, when it comes to bread, I'm all about the crust. Well, a ficelle is a long skinny baguette that's almost all crust. They are PERFECT for me! I can't wait to buy one soon. Mmmmm Bread.

The one I saw in the store was even thinner than this one, which looks almost like a regular baguette, but you get my point.

BTW, I saw I had a few grammatical errors in a few of my posts. Sometimes I get too in my head when writing and forget to check for little things like subject-verb agreement. I'll try to do a better job about correcting those things.   :/
Posted by Lize Brittin at 9:25 AM