Whenever I hear someone taking about addiction being a choice, I immediately think the person speaking probably hasn't lived it. While it's true that addiction of any kind is a choice, it can definitely feel like a force outside ourselves. That's because it's not about willpower. Addiction involves a mental aspect, but there's always a physiological component and some would say a spiritual angle too. Sometimes the core wound that's driving the addiction can be so buried, it's nearly impossible to uncover and overcome. For 20 years, people told me to just eat more. Nobody could understand how stuck I was. There was a part of me that begged to be free, but the dictator inside my head had a strong influence on my actions. When the situation got really bad, I would do things knowing I was risking my health, but I couldn't seem to stop. Even after having seizures, I would restrict my food intake to the point of getting heart palpitations and experiencing weakness. Yes, I had a choice, but it certainly didn't feel like I did. The power that my addiction had over me was enough to make me take very dangerous risks with my life. Sitting on the other side, I now understand how frustrating it is for others who want to help.


I have a friend who complains about over eating. He can't seem to stop a binge, even when he knows he's heading for one. In much the same way that an alcoholic might find his car turning into the liquor store parking lot without even thinking about it, my friend will find himself at a restaurant ordering eggs benedict with the works, even though he doesn't feel all that hungry. It seems that being aware of his problem is only part of the battle to overcome it. So far, any advice has been met with either, "I've tried that," or "That doesn't work." I often feel like he's searching for something he may never find. It takes great courage to take care of yourself when fighting an addiction, and when that involves change, it can be even more of a challenge. Believe me, I understand the pull of a binge. I had bouts of bulimia in the past, so I know how out of control one can feel. Does it really come down to a choice though? I think there's more to it. If it were as simple as binge or don't binge, I doubt so many people would be struggling. The body has all kinds of needs: emotional, nutritional, physical etc., and when any one of them isn't met, it can cause trouble.

As an example, when I was starving myself, it affected my brain, and, strangely, I had more thoughts about being fat and feeling ugly than when I began to feed my body properly. What's even more bizarre is that I felt completely out of control when I was eating but not getting enough protein. Looking back, that was probably the most miserable time in my life, even though I was trying to head in a better direction. I fell into a pattern of eating all kinds of sweets, things I had deprived myself of for years. As a result, I wasn't getting what my body really needed. I was eating, but I wasn't feeding myself the nutrients my body craved. The weird result was that I wanted MORE desserts. A friend helped me see my errors and encouraged me to eat differently. It helped. Once I addressed all my nutritional needs and I gained weight more sensibly, I slowly began to have fewer thoughts about my size. I also lost the intense cravings for foods that weren't so healthy. I'm not going to deny the amount of work I put into changing. I can also acknowledge how difficult it is to know where to even begin. There is so much to consider when it comes to addiction and how to stop.

As much as I hate to say it in this way, you have to love yourself enough to do the right thing. This doesn't mean you have to emulate Stuart Smiley, but it does help to be kind to yourself with both your thoughts and your actions. So much of overcoming addiction has to do with being OK in the world. I know what a struggle it was and still can be for me, so I don't like to push this idea too much on others. However, it's essential to address how your feelings about yourself contribute to certain behaviors. Even just accepting yourself is a positive step forward for those of us who have trouble seeing our worth. Much of my own addiction stemmed from feeling insecure, not being heard and feeling like I had no control in my life. I let people walk on me, and my self-esteem wasn't very good. It all played into how I managed my life. I also had to consider how I was treating others in the throes of my illness. When you love someone else enough to do right by yourself, it shows how addiction really can come down to a choice. I've known many women who stopped starving or purging because of children, a lover or a relative. That's often where it starts, and only after does it become about doing it for the self. Deep down, recovery has to be for the self, yes, but it can start by recognizing that our behavior affects others.

In other news, I seem to have pushed my cycle to one period every 3 weeks, which is better than one every 2 weeks, but it still sucks. I don't know how people train through this shit. No way could I race like this, which is why I don't register for anything until the day of the event. Saturday I bonked after dragging myself out the door for 3 x 6 min at an easy tempo pace. My foot is still a little sore too. I'll be making an appointment to check in with the doc sometime soon. Well, that was a very random addition to this post. 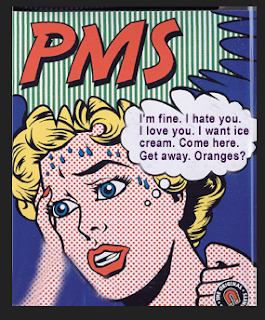