When I first started writing Training on Empty, I was doing it, in part, to tell my story, but more importantly, I did it to give people some hope and inspiration. I wanted to show others that recovery from anorexia and other eating disorders is possible. Somehow sharing the fact that I have moved passed the hell of restricting and no longer even think about sticking my finger down my throat (and haven't for over 15 years) gave me the courage to continue working on any lingering issues, some I didn't even know I had. I also started a blog, and, as I continued to write in it over the years, discovered that recovery is a process. Every year I grow and learn. Recovery, a full recovery, I believe is possible, but it takes staying one step ahead of the illness, recognizing patterns and triggers and finding new coping mechanisms in order to be healthy. Fear is the biggest restriction when it comes to recovery. Mostly, though, it takes radical trust in yourself and a good dose of self respect to get over an eating disorder.

Self respect doesn't mean sham confidence or being cocky. There's beauty in being humble. When I look at some of my idols in running, most are modest, as they understand how much genetics, luck and hard work play roles in success. That's true in any field. The kind of confidence I'm talking about comes from treating both yourself and others well and with kindness. It grows the more you aim to do right in the world and aim to be less selfish. This is tricky, because those of us with eating issues can be both narcissistic and selfless at the same time. We give too much while obsessing internally.

I think I will create a handbook on what I feel are the most important factors in recovery. I have posted most of the material in my blog already. The information is also in Training on Empty, but it will be nice to have a condensed version in a booklet format. Because I have several other projects going on at once, this might take some time, but I'm hoping I can have it completed in a few months. 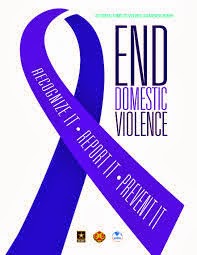 
At first when the “Don't Be That Guy” and "Make Your Move" campaigns came out, I thought it was something that would promote the idea that blaming the victim isn't a good thing and perpetuates a culture in which women are objectified, abused and thought of as lesser beings. I think this was the idea behind the campaign, but The Violence Stops Here and the Anti-Rape Campaign ads don't exactly remove the blame from the potential victims. In fact, the blame in some of the ads is still pretty obviously resting on the drunk or careless woman's shoulders. No, in these ads, the focus is on some third party stepping in to rescue the victim. Blame aside, I'm not sure how this is supposed to help address the root of the problem.

My real issue is that the creators of the ads claim they are shaming the potential perpetrator, but nobody is stating outright, "Hey, you fucking asshole, don't do that! It's wrong." Nobody is demanding that HIS behavior be addressed. Instead, let's send the message that we need to get women out of the equation and rush them to safety. They can't be out in public on their own, ESPECIALLY if they want to have a few drinks. God, keep them OUT of the bar or they will get into trouble. My ad campaign would be different. It would be the "Don't be an asshole, you piece of shit" campaign. Now, that would focus on the REAL problem (i.e., Tell the perpetrator he's in the wrong and deal with him directly.) 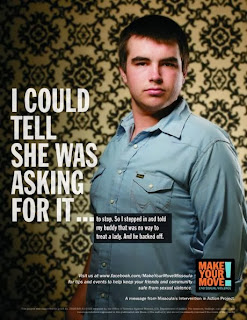 Ahh, yes, she was asking for it to stop. This guy's buddy apparently wasn't listening to her, so the big hero steps in and all is right in the world. Shit. How about a better ending where the guy wasn't listening to her say stop, so she leaves or, if things get really out of hand, kicks him in the nuts. What is the end result here? The woman always needs this guy around to keep his buddies from attacking her? Ick. 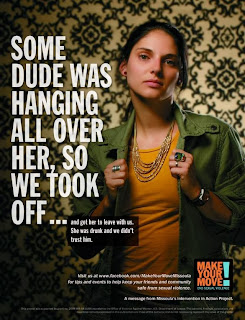 This one isn't as bad, but why does she have to be the one to leave? Why can't the scary dude hanging all over her be the one escorted out of the establishment or at least called out on his icky behavior? I suppose if anyone, male or female, is terribly drunk, friends would want to watch out for this person, but isn't the bigger issue some dude who's getting ready to take advantage of a human being? Why doesn't anyone go up to the the dude and tell him he's being a scumbag by hanging all over a drunk girl?

In other news, I don't have uterine cancer. That's a relief, because all my symptoms were pointing in a bad direction. My doctor is taking the wait and see approach. If I start spewing as much blood as Quint in Jaws when he is attacked and eaten by the shark, we will take some action.

My injury is still nagging me, but I'm seeing some progress in my range of motion. Now to address the pain issue.

October also means the new season of American Horror Story. So far, it's good. The slower pace (for now) is a nice change from the intensity of the first few episodes of last season. 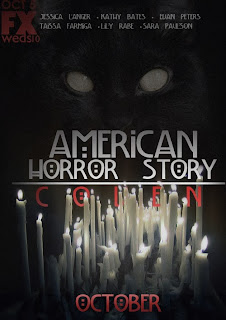