I'm going to drop a little trigger warning here and note that this post discusses transgender athletes, and some might find it offensive, even though it's not my intent to cause anyone harm.

There's an image an author once described of a clean stretch of sand, no footprints, with the caption, "Do I dare?" Do I dare rock the boat, risk rejection, put myself out there, disrupt the sand or snow? Do I make tracks? I've been thinking about this post for a long time, years actually, but every time I go to write it, it's overwhelming. Where do I even begin?

When I first started running, I had this naive idea that maybe eventually women could run as fast as men. I was a young teenager and occasionally beat the boys, but as I improved, I realized that a woman winning a race outright wasn't as simple as her training and working hard.

When I set the record at the Pikes Peak Ascent (clean), my time placed me just slightly outside of the top 15 men that year. After being blocked by an arrogant guy on the trail for a short stretch early in the race, specifically because I am a woman -- actually a 16-year-old girl at the time -- I finished not too far behind Scott Elliott, who later went on to win the race something like eight times. We are both still listed in the top 20 all-time bests. If you look at the all-time records, the top woman's time is 2:24:58, while the man listed as 20th on the list ran 2:09:28. This is not unlike the comparison between men and women using flat marathon times. There is a gap between what the best men and the best women can run. On a side note, the woman who is listed as the second-fastest at Pikes was given a little slap on the wrist for using a fertility drug a few years earlier because she was trying to get pregnant at the time, and drug testing was implemented for the mountain race a year after the women's record of 2:24:58 was set.

Over the years, it became more apparent to me that men have an advantage. There will always be "Yeah but," exceptions, a woman winning a race outright, especially in longer distances, for example, but generally speaking a man will almost always run faster than a woman, even if their training is basically the same. It bothers me that this is so, but it just is. Some characteristics that people don't often address when discussing the difference between men and women are lung, leg, and heart size. In addition to having more muscle mass and longer legs, in general, men's oxygen consumption is higher due to both bigger hearts and bigger lungs. And, of course, there is testosterone to consider. According to Healthline, by adulthood, a normal, healthy man will have a testosterone level of at least 300 nanograms per deciliter as compared to an adult woman whose normal range will be between 8-60 nanograms per deciliter. This article does a good job of going into the biological advantages men have over women and how testosterone plays a role. I'm sure readers can figure out where I'm going here, and I should note that in this post, I'm only addressing running, not other sports in which there are even more concerning issues when athletes with great physiological differences participate.

Author Kathleen Megan mentioned the division transgender sports has caused among women's advocates. I'll add that the division is quite apparent in the general public, too. In one article, Kathleen quotes Donna Lopiano, sports consultant associated with the Women's Sports Foundation:

I don’t know of a woman athlete who doesn’t want trans girls to be treated fairly,” said Donna Lopiano, who led the Women’s Sports Foundation for 15 years and now runs a Shelton-based consulting firm that works with clients on Title IX and other sports management issues. “But the cost of treating her fairly should not come at the cost of discriminating against a biologically-female-at birth woman.

This is basically my stance. People are so concerned about not offending anyone in the LGBTQ community that many shut down and don't say anything. I did for years. Others who think that there should be a different way to approach trans athletes in competition are often discounted or attacked. Anyone who's not fully supporting trans women competing against the gender they identify with is called transphobic or worse. After recently saying that I donate to the ACLU because they support racial equality, I'm rethinking where I will put my money after one of their lawyers lied, posted questionable tweets, and also suggested on Twitter that trans women are biological women. In the linked article, Glenn Greenwald notes:

ACLU lawyer Chase Strangio decided to spew this extremely grave accusation about J.K. Rowling and Abigail Shrier, both of whom oppose the inclusion of trans girls in female sports: 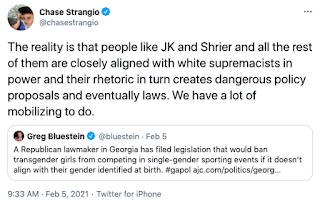 As I’ve written before, I’m not in agreement with those who advocate this absolute ban. I’m open to a scientific consensus that develops hormonal and other medicinal protocols for how trans girls and women can fairly compete with CIS women in sporting competitions. But that does not entitle you — especially as an ACLU lawyer — to just go around casually branding people as “closely aligned to white supremacists” who have never remotely demonstrated any such affinity, just because you feel like it, because you crave the power to destroy your adversaries, or are too slothful to engage their actual views.

Saying shitty lies about women aside, Strangio's take on biology is not accurate either. Kevin Beck will always get to the point more creatively than I, but I’ll press on here.
There is a biological component when it comes to gender identity, but that isn't the same as addressing an individual's biological sex. I'm not suggesting that one should call those who identify as women anything other than what they prefer, but when it comes to competition, I would like to see fairness. I see quite a few people quoting an open-access neuroscience article from 2019 that states, "gender is multi-dimensional" without fully understanding what this means. It's complicated, no doubt, but, when it comes to biology and neurology, there is a distinction between sex and gender. In very general scientific terms, sex is based solely on biological factors including chromosomes (DNA) and gonads (testes or ovaries). Gender is far more complex and is based on how an individual identifies, how genes are expressed (epigenetics), and how the brain is influenced in the long- and short-term by experience and epigenetics. In short, one (sex) is determined by biology while the other (gender) is influenced to a degree by biology. There's a big distinction there, and gender identification is not the same as an individual being born with a specific kind of genetically determined advantage like a runner with exceptionally long Achilles tendons.
Examining testosterone or the biological influence on gender reinforces the fact that transgender athletes who identify as female have an advantage, one that lasts over a year after hormone therapy has been implemented. Hormone therapy does not address other characteristics like lung size, leg length, and oxygen consumption. Recently, three young girls filed a lawsuit in Connecticut in an effort to block transgender athletes from competing in girls sports. One can imagine how difficult it must be for these youngsters to come forward with their concerns, simply asking for a fair chance in their sport.
From the Associated Press article, attorney Christina Holcomb states:
“Forcing girls to be spectators in their own sports is completely at odds with Title IX, a federal law designed to create equal opportunities for women in education and athletics,” attorney Christiana Holcomb said. "Connecticut’s policy violates that law and reverses nearly 50 years of advances for women.”

When it comes to transgender athletes, what I would love to see is a solution, one that's fair to both biological females and those who identify as female. I think there's a way to do this, but I don't know if it will ever happen, partly because there's not a whole lot of excess money in running and also because most people take a win-at-all-costs approach to life, meaning few people want to have a civil conversation if you disagree with them. I find it shocking that many who claim to want inclusivity are so militant when it comes to others holding a different opinion.

Some ideas that have been presented include:

I honestly think that most people in the running community would like to see a solution that is fair to everyone. The problem is that bringing up transgender athletes is kind of like bringing up religion or politics. Few people are willing to see anyone else's point of view, and if you express even the slightest dissatisfaction with having transgender athletes compete against girls and women, be ready for some harsh criticism.