That last 10 minutes of my run Saturday was brutal. I think I was done with about 15 minutes still left to complete. The dead man's shuffle got me home. I don't even know why I was dragging so badly, but it must have been a general fatigue type thing, not from the effort of that specific run. Lately I'm holding up OK, but I'm still dealing with a few minor, nagging issues. Really though, I'm just happy that I can run and train at all. The foam roller, stretching and strengthening are helping somewhat. I sort of wish I could get a shot of cortisone in my overly stressed out butt. The one in my foot helped tremendously. There seems to be a muscle in spasm in my backside too. AAK! 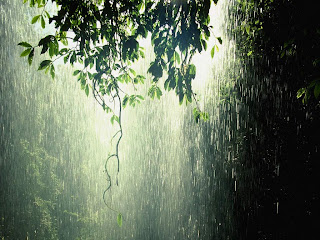 I slept in today, because it's my day off. The air is cool and it looks like rain might be on the way later this afternoon. Last time there was a downpour, I bailed on my run, not because of the weather, because I was having one of those days. A few days later, I was on a run when it started to rain, but it was more of a little drizzle. It was actually kind of nice, because the clouds covered the blazing sun and the water cooled the hot air. It got me thinking about all the times I got caught in various storms running in the high country back in high school and college. Waking up early wasn't as much of an issue in those days, but even rising with the sun didn't always get me up and down the mountain before the afternoon thunderstorms rolled in, covering the sky with dark gray clouds and showering me with either hail or rain.

One time, when I was running with two guys on my high school team, we made it to Roger's Pass just as some dark clouds were sneaking over the top of the mountain. We didn't linger at our highest point, quickly doing an about face once we reached the halfway point of our run. Usually our descents were a slow recovery jog down the trail, but all three of us knew we were about to be racing the approaching storm. Our pace quickened as the thunder rumbled in the distance and the sky went from piercing blue to black. None of us said anything after turning around when one of the guys said we needed to hurry down; we were too busy watching our footing on the rocky trail. Just as timberline was in sight, the first big clap of thunder sounded right near us. Shortly after we got into what seemed like the safety of the trees, lightning burst into the sky, and goosebumps erupted over my skin. I can only speak for myself, but I was scared. The three of us dashed down the mountain as the angry sky unleashed all its fury, first dumping buckets of water, then releasing pellets of hail. The lightning and thunder continued until we finally reached the parking lot, wet and cold but safe from the storm. We dove into the car and immediately turned on the heater, which seemed an odd thing to do in the middle of July. It was still dark around us. We let out some nervous laughter and talked about how crazy that experience was. It will definitely stick in my head as one of my most memorable runs! A short drive toward Boulder brought us through the darkness and back into sunny weather. It's wild how quickly the weather can change at altitude.

Well, it's time for me to stretch and think about getting out the door for an easy run, hopefully before any water spills out of the sky.


Some time ago, I posted a link to several short stories. I decided to go ahead and re-post one with the confession that it is my first try at a short story. I wasn't sure I wanted people to know I wrote it, mostly because I didn't want people to think it was non-fiction. To be clear, it and the novel I'm working on are pure fiction, which I'm finding is more difficult in many ways than writing non-fiction. People often say that bits of reality find their way into pieces of non-fiction, and that's definitely true for most writers. I see myself or the people I know in some of the characters I create. Even the story can have elements of reality in a piece of non-fiction work, but the beauty of fiction is that one can stretch and create more freely without having the limitations of accuracy and honesty to consider. If anyone would like to read my first short story, here is the link again. I believe you can read some of it before purchasing:
http://www.amazon.com/The-Constant-Observer-ebook/dp/B00817J1RW
There are a few little errors that have been corrected on the draft but, for some reason, weren't corrected on the published version. I'm not sure how that happened.