There's nothing more embarrassing than tripping over nothing and falling while on a cool down run with people. I had all kinds of anxiety about falling on the downhill portions of the cross country race this morning, but leave it to me to get through all the tricky footing areas just fine and do a face plant on a flat dirt road. I don't even know what happened. My foot was feeling a little unresponsive, and the next think I know I'm on the ground. OK, it was sort of funny, because my first thought was that I wanted to put my head down and take a nap right there in the middle of the trail. The bad news is that I'm going to be sore, I'm sure. My hand is pretty messed up too. The good news is that I got through another competition in one piece! Let's forget about falling to pieces after the race for now.

The week leading up to the race wasn't a very good one. I was having some severe tightness and pain in my butt/hamstring area. That seems to be a really common injury in runners. My plan was to warm up and see if I could get my body to loosen up a little. All that rolling on the foam roller I did the last few days must have helped, because I did feel much better. I'm at the tail end of my period, so the excessive soreness I experienced earlier in the week could have been related to that. Some minor cramping caught up to me in the last half of the race, but I was able to manage despite some annoying little issues like that. Fucking hormones- grrr.

I had a great first lap. Maybe I didn't go out fast enough, but I felt good. It was really fun to be in such a competitive race, even though I knew my estimated time would put me toward the back of the pack. I felt like I was making an effort to pass people and did for much of the race. There was one girl who was exceptionally tough up the hills and on the flat, and the two of us kept going back and forth, passing each other. She pulled ahead in the end. I clearly need to work on my finish. I got a little bit frustrated in one section with a minor but muddy and uneven downhill. I think I muttered "Shit" at nobody in particular going down that thing, just expressing some inner turmoil. Sometimes those little down hill sections are more difficult to traverse than the bigger ones. My time wasn't fast: 27:13, which put me in 121st place. There were plenty of places during the race where I felt myself slacking, holding steady, not pushing it or caving into fear. I know I need to work on things, but it felt really good to have a solid first lap. I'm going to try to hold that image of racing hard but feeling good in my head.

Melody Fairchild was 2nd in an insanely fast time. Her amazing summer of racing continues. It was really cool that she introduced me to a few younger girls, some who were watching the race and some who had run. Oddly enough, a few of them knew my name. I always think I'm this total has been, and get a little flustered when people compliment me on my past running achievements,  especially knowing where I am right now. Overall it was a good day. I'm happy with it for now. Knowing how I was struggling this week, I'm thrilled that I was running at all! 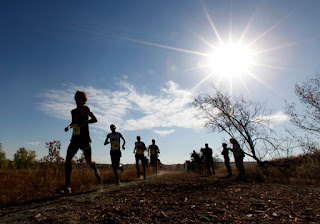 Lately I've been thinking about self publishing. I still have an agent, but my contract can be terminated at any time with written notice. It's great to have an agent, so I don't want to make it sound like I'm not appreciative. My agent rocks. It's more that I really want my book to be out there. It's ready. I'm ready, and I think there are people who could benefit from reading it. So far there's a fairly big majority suggesting that I go that route. I'm not convinced yet, but I'm starting to lean in that direction.

I'm off to work in just a sec, so this is going to be another rushed and unedited post. I hope it's not too terribly written, but I wanted to get my thoughts out there after the race.
Posted by Lize Brittin at 1:17 PM