I haven't been posting updates about my running lately, mostly because I'm just trying to hold steady. Last week I went to the foot doctor to get a synovial cyst removed from the top of my foot. Since I was dealing with some of the same issues I had earlier in the summer, I also got two shots of cortisone, one for the angry muscle that wants to pull my big toe to the left, and one for the hysterical nerve that is freaking out about the stitching that didn't dissolve. Getting a synovial cyst removed is a very odd thing. I had this idea that to aspirate and drain it, a needle would be plunged in and the fluid sucked out using some kind of syringe. Instead, it's pretty much like popping a zit. A big needle is poked through the skin, and then the doctor squeezes the lump, allowing a clear, jelly-like fluid to roll out. There's minimal blood, but it's still kind of gross. That said, I couldn't help but watch. I sort of had the urge to ask the doctor if I could do the squeezing too, but I refrained from asking.


I haven't decided if I want to jump in a race Thursday or play it safe and stay on the trails, which will either be less crowded with all the other runners in Boulder racing or more crowded with everyone else hiking with their dogs.

After that cyst description, it's probably not the best time to bring up food, however, I mentioned in a previous blog post that I wanted to add a few recipes now and then. With Thanksgiving a few days away, I should probably dig up my pumpkin rum ice cream recipe, but I'm not sure where to dig for it. Instead, I'm going to post my chocolate truffle ice cream recipe, because it's insanely good. This is the recipe I created and used to make for a little Italian restaurant when I was a pastry chef. One time, a day or two after I made a batch, the owner called me up requesting more. "Lize, we're out of the chocolate ice cream," he said. When I replied, "Hey that's great that it's selling so well," he confessed that the staff had eaten most of it.

Scald the cream and milk in a thick-bottomed pan over medium-high heat and set aside. Beat the yolks in a metal bowl. Add the sugar and pour in the cream/milk mixture while beating. Transfer into a clean heavy-bottomed pan and cook over medium-low heat, stirring until the mixture coats the spoon. Stir in chocolate and stir over very low heat until chocolate is completely melted. Add in remaining ingredients and cool. When mixture is cool, freeze according to directions on the ice-cream maker.

As long as I'm into the ice cream recipes, I will add this one. I created it before I started working at the restaurant, but I used it there. It was everyone's favorite after the chocolate ice cream.

Scald the milk and the cream in a heavy-bottomed pan over medium-high heat and set aside. Beat yolks and egg with the sugar in a metal bowl. Slowly pour in the milk mixture while beating the eggs mixture. Add lemon peel and mint, and cook while stirring over low heat in a clean heavy-bottomed pan until mixture coats spoon. Strain the mixture into a clean bowl to remove mint leaves and lemon peel. Stir in remaining ingredients and cool completely. Freeze according to directions on an ice-cream maker. 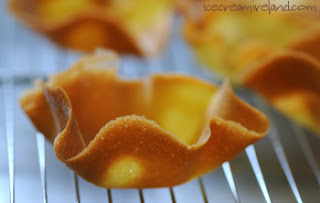