The mountain runner in me

First some exciting news: Lauren Fleshman announced on her blog that she is expecting. I'm of the opinion that those of us who can transition in life are happier and more successful. When I say those of us, I don't actually put myself in that category. I don't tend to deal with change all that well. In fact, my resistance to bending has held me back in many areas of my life. I have definitely gotten better, but I often dig my heels in deep when I should be letting the winds lead me in new directions. A big congratulations to Lauren for stepping into a new role.

The Footlocker Cross Country Championships race was Saturday morning. I watched the coverage of the girl's 5k. It was great to see Jordyn Colter run well. I hope that whatever plagued her earlier in the season is behind her. Of course I worry, but it would be nice to see her have a long, successful and HEALTHY career.

Wow, things have changed since I ran it and not just the name! It's like watching a mini Olympics. There are interviews, events and the whole thing is filmed and broadcast live online. It makes me realize that runners are definitely under the microscope more these days. I'm glad things like LetsRun wasn't around in the '80s. I don't think I would have handled the commentary well given how sensitive I was back then. The Footlocker race seems so BIG now. When I ran and it was still the Kinney Cross Country Championships, I didn't realize what I was getting into, partly because I was the first girl from Colorado to ever qualify for the event. I knew it was a national race, but I didn't get just how good some of the other runners were. Quite a few of the girls I ran with both my junior and senior year went on to have very successful careers; some even made it to the Olympics. Suzy Favor Hamilton was one of those girls.

In my book, I mention how Suzy and I met at the Kinney regional meet and kept in touch throughout high school and after. We are still in touch today.

Going into my first of two Kinney races, I was coming off the Pikes Peak Ascent win and an undefeated cross-country season. Fatigue was setting in, but I was too compulsive to rest much at that time. I remember starting the race in last place. Speed was not one of my assets. Over the 5k course, I inched my way up to 15th place, which wasn't bad considering I thought of myself as a mountain runner, not a cross-country racer. The course I ran in San Diego is the same as the one the boys and girls ran Saturday. It has a big hill that the racers go up twice. Unfortunately, the hill is too steep and short for someone like me to use as an advantage. It's more for runners with explosive speed, not for those of us who like long, gruelling uphill segments. My finish left me hoping I could do better the following year. Little did I know I would first have to face what could have been a career-ending injury and a flock of internal demons before I could get to the start line of Nationals the following year.

My next attempt to run fast on the course at Balboa Park landed me in 7th place. It was an improvement, but I was slightly disappointed since I had set a course record on nearly every cross-country course, road and mountain race I had run leading into nationals and was coming off an impressive 35:15 10K a few weeks earlier. What people didn't know was that my real accomplishment that day was not running related; it was my success in avoiding any purging before the race, something I had done before winning the regional race. Though I was diagnosed with anorexia, I did have bouts of bulimia my senior year of high school and in college when I was struggling with the eating disorder. Crossing the line further back than I wanted left me with mixed emotions. Despite knowing my sport was really mountain running, I had dreams of being in the top three at the Kinney race. It just didn't happen. I didn't have the turnover and leg speed that the other girls did.

As much as I liked cross country, road racing and even the track, mountain running was more my thing. I'm not sure why mountain runners are always called crazy. Really, is running up a mountain any less sane than sprinting 400s on the track or pounding out repeat intervals on the roads? Is running on the dirt any more bizarre than spending three hours painting or practicing the piano? Crazy or not, I have always felt more at home trotting on the trails. Mostly I love hill climbs, anything with a super long grind to the top. Even though I've got that tight butt thing going on these days that limits my stride, I'm still all about the hills. In fact, now that my gait is wobbly and uneven, going up in the hills is better for me. There's less pounding on my aching body. I suppose I'm a mountain runner at heart, even when I can no longer go the distance and have slowed down tremendously. 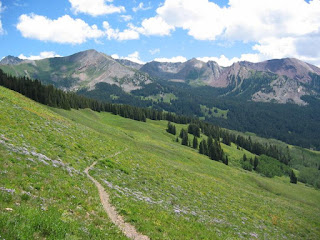