Thanks to GZ, who had not yet deleted the following from his reader, the post has been restored. I know it's no masterpiece, but I'm still glad it's salvaged. Check out GZ's blogs, by the way. You won't be disappointed! Thank you, GZ!!!
I was reading another blog I really like, and found one post that resonated with me, and, based on the many comments, quite a few others as well.

About 10 years ago, right when I was finally getting back on my feet after the wost of the anorexia, I went out for coffee with a guy.  I had a glass of water with my decaf, and he had some tea. This guy knew a little bit about my past, but hadn't seen me at my worst. We talked about the mundane, just to get acquainted, and out of the blue, he blurts out, "You look so meaty." My first reaction was to want to throw my glass of water in his face. My second was to want to flounce. I did neither, and, instead, very politely told him that after 20 years of anorexia, that was the last thing I wanted to hear. He didn't seem to get it. I then told him I didn't really care to have anything to do with him and left, never looking back or regretting the move. Then it was three days of fretting about whether or not I was too fat. I cut back on the calories a little, and the debate raged in my head. I asked my mom and a few close friends if I was looking a bit chunky. They laughed and said I was crazy to entertain such an off base idea. Fortunately, I came to my senses before I did anything drastic, but it was pretty amazing how someone spilling some careless words in my direction affected me so deeply.

Shortly after and also during my recovery from the illness, I was extremely and maybe even overly sensitive, a trait that still lingers. While my neighbors may have been trying to be nice by saying I looked good or healthy, I heard it as, "you're fat." It seems trivial, but for someone coming out of an eating disorder, words like that can carry a lot of weight, so to speak. And words have power. For those of us who struggle, negative phrases can get played over and over in our heads like a broken tape stuck on repeat and become part of our beliefs. It's important to be able to know that people sometimes say stupid shit, not realizing how it will affect others. The main thing is to be able to move past the words of others, no matter how biting or seemingly cruel, and continue on a healthy path.

The humidity is making my hair look like Helena Bonham Carter having an outrageously bad hair day. I forgot about the elements being inside on the bike so much. Yesterday it snained. It was a weird combination of snow and rain, but not exactly sleet. I had to think about what to wear on my little 20 min jog. The last few days my legs have been sore and tired, so running hasn't been quite as fun. It's amazing how sore I'm getting while running so little, but since I'm still biking, I'm sure that has something to do with it. Today I have an easy day planned. 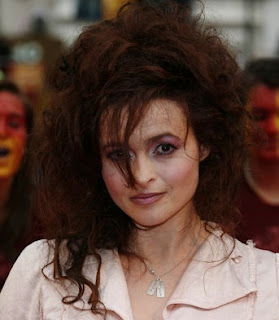 (My hair is shorter and just a tad more bride of frankensteinish lately.)

I'm jumping all over the place, but I was tempting fate yesterday, and played a little Russian roulette regarding my heart valve leak. Knowing full well that too much chocolate can trigger a big old episode, I tested the limits, and ate one of those mini Cherries and Almonds in Dark Chocolate Chocolove bars. I was somewhat cautious, but it was still a bit of a risk. My chest was a little tight after, but I think the amount is right on the edge of what I can handle. normally I'm ultra careful when it comes to these things, but yesterday was one of those "oh fuckit" kind of days. Of course, I buzzed around on a chocolate high for a few hours after, and then crashed, even though I made sure to eat some sensible things too.

The chocolate bacon debate is still raging among a few friends. I still think that hickory flavor and chocolate do not go well together. It's like sticking a Hershey's kiss in liquid smoke and expecting it to taste reasonable. A friend suggested caramelizing the bacon, which does sound better. Maybe if the bacon were a honey bacon without the smokey flavor, it would be better. I have yet to find a chocolate and bacon combination that I like, but there are loads of the pair in desserts all over the place that sound good. I actually thought that the bacon maple pie (no chocolate) sounded more interesting. In addition to the pie, Tee and Cakes makes a chocolate bacon cupcake that is supposed to be tasty. I have yet to try it, but I know their double chocolate cupcakes are insanely delicious. Actually, I have yet to try something I don't like there. I used to joke that I wanted to get married, just for the cake. It's one of those things that I never really eat unless there's a celebration or it's my birthday. I might have to look into eating more cake, celebrations aside, because there are no wedding bells in sight around here.

Ohhh! One last note. I tried another interesting cheese from the new Alfalfa's Market. It was a very nice little goat cheese brie. Since it was part of the whole mother's day thing, I didn't do a full review, but I had a small sample that was very good. It was much more subtle than I expected. For $10.00, it was a great cheese. It came in an elegant square package, and made a great addition to the other foods I bought. There was a tiny bit of a tang that crept up and lingered after I tasted, which I liked. Man, that store is something else. It's quite upscale, but the employees all seem nice. The customers are not as uptight as the big Whole Foods crowd too. For some reason, it seems sprouts and goji berries can often put people in a foul mood.
Posted by Lize Brittin at 9:36 AM