Years ago, I went to a lecture given by the Iranian Nobel peace prize laureate, Shirin Ebadi, a lawyer who has been exiled for expressing her opinions about the Iranian regime. Ebadi has been know to take many pro bono cases, focusing on women's rights and human rights. Though she is considered among the 100 most influential women, few people know who she is. Sadly, many people, especially people in the United States, have no clue what atrocities against women go on the the world. Just recently, a woman in India has allegedly been burned alive for failing to give birth to a son. In Turkey, a young girl was found dead after being buried alive by her father in an "honor" killing, because she was friends with a few boys her age. Brutal and senseless killings and abuse against women continue to take place throughout the world.


Even though I consider myself somewhat of a feminist, I can't imagine the courage it takes to attempt to stand up to outdated and unjust laws in countries where doing so will likely get a person exterminated or badly maimed. Stop the Worldwide War on Girls reported that acid attacks, mostly against women, are on the rise, not just in the Middle East.


"A brutal crime more commonly associated with Pakistan or India is now on the rise in South America: Jealous husbands, spurned lovers and, in a few cases, even perfect strangers are dousing women with sulfuric or nitric acids, literally burning off their faces. In Colombia, the horrific trend is terrorizing women and alarming officials. This year, about 100 cases of acid attacks — mostly against women — have already been reported in Colombia."


Rather than get into a big debate about what feminism is, I think it's important to focus more on how human rights relate to feminism. In this country, it's easy to forget how far women have come and how hard first wave feminists fought to allow for change. So often, people don't realize that feminists are attempting to achieve political, economic and social opportunities and rights. When we can put on pants, paint our fingernails, study at a school, read a book at the library, go for a run or keep a job without fear of being attacked for any of these acts, it's easy to dismiss the idea that not all women have the same rights. Unfortunately, religion can sometimes further complicate women's rights, but that's a separate and messy can of worms that I will leave untouched for now. Feminists in the United States are are still pushing to have equal representation politically and attempting to create more fairness economically and socially. We have come a long way, but there is still room for improvement. Those who insist that all feminists hate men (I'm sure some do) don't understand what feminism, on a worldwide scale, represents. 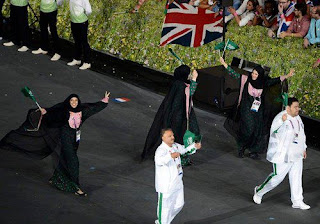 When I first read about the two Saudi women participating in the Olympic games, the first time any females from that country have done so, my heart soared. Then I realized that this is only a small step in terms of how women are treated there. Unfortunately, while this is movement in the right direction, it doesn't mean that Saudi Arabia has opened the doors for women and girls to participate in sports. Gender inequality is blatant with strict rules prohibiting ladies from engaging in sporting events, even in government schools. There are no sports clubs or teams for women, and about the only place a woman can freely do a workout is in a health facility. Unfortunately, not many can afford to be a part of these kinds of services. There is almost no hope in terms of more equality there at this time, despite what looked like a great advancement with these two athletes being a part of the Olympics. On the other hand, perhaps sensing the perfect opportunity, the Human Rights Watch is trying to encourage the IOC to use this time to pressure Saudi Arabia into creating better conditions for women that would allow for sports facilities, clubs and sports education in schools.


I admit that I'm still thrilled to see Wujdan Shahrkhani and Sarah Attar participate. I just hope that it's the beginning of something more, the first step in a long march for all the women in Saudi Arabia. What was not as much in the spotlight but equally important was the mention of the first woman from Qatar, Bahia Al Hamad, joining the Olympic team. Maziah Mahusin, a hurdler from Brunei, was also the first woman from her country to make it to the Olympics. Though these woman should be applauded for their bravery, strength and ability, it's unlikely that any lasting change will occur in terms of women's rights, especially in Saudi Arabia. Still, one can hope, and, if nothing more, it does raise awareness.

All this said, I can't help but want to jump up and yell, "YOU GO GIRLS!!"