Sometimes the irony in life is a little bit too much. Just when I was saying I haven't had a big episode with my heart valve leak, it happened. It wasn't the worst I have had, far from it, but it was enough to make me consider calling off work, heading to the hospital or calling for help. I didn't though. It was hard to face working a five hour shift after that, but I managed OK, despite the palpitations, funky feeling and lingering tightness in my chest. The main thing is that I kept relatively calm, telling myself it was just my heart valve. Now I'm exhausted and want to sleep, but I still have things to do. My knee and body are feeling a bit tweaked lately, and even my recovering foot is complaining. I'm not sure if it's the weather or me not doing something right, but I need to watch myself here. I'm kind of having one of those moments where I want to curl up in a ball and cry myself to sleep. The knee is scaring me, as biking is all I have right now. The thought of swimming as the only remaining sport that won't break me completely throws me into despair. I generally opt for complete rest over swimming-that's how much I hate it. Maybe PT will help tomorrow. I'll try the bike, as it didn't seem to make things a whole lot worse Saturday, but I really don't want this to turn into something more than the worrisome twinge that it is right now. Sigh.

My real post is actually unrelated to all of this, but I do like to note irony in life when it appears, even when the end irony is something that generally sucks. Lately they seem to be appearing quite a lot, both the irony and the sucking.

Getting back to my post, I wanted to address the head in running. There was a time where my running was all about mental limitations. The goal was to see how much further I could push my body than what my head said was OK. Everyone has those moments in a race where the brain says, "Woa, Slllloooooowwww DOWN! This hurts!" If one is able to push past that, sometimes a breakthrough can occur, and, instead of it hurting more, everything comes together. Other times it plain sucks, and a big old monkey jumps on your back, forcing every muscle in the body to tighten. Still, having the courage to push through to even see what might happen is the key to mental toughness. In terms of mountain running, I attribute a great deal of my success to sheer curiosity: What's beyond that next ridge, and, in order to find out, can I keep going? if I keep going, how hard can I push it? When I was young, running was exciting. Somewhere along the way, I grew afraid of it.

It's true that this excitement, courage and strength waned as I got older, and thoughts of winning were replaced with doubts about finishing. Maybe I just got tired, but my head got more in the way too. Several years ago when I was doing some racing again, my coach used to joke that I needed do-overs in intervals. I would go out and run the first interval, be it a mile or an 800, and when it was over, my coach would say, "Great! now that we have your head out of the way, let's see what your body can do." After all those years of pressure and stress, I was still running with too much in my brain. All of that translated into fear and restriction in my body, and slower times on the stopwatch. There are no do-overs in races, so I had to figure out a way to get my head out of the way when I stepped to the line. Fortunately, I did have a race or two where I was able to do that. Since then, life has hit hard, and I'm back to feeling more overwhelmed with even the thought of running.

I was told that there are 3 types of runners, only it's really just two: those who don't live up to their potential in races and those who race as expected or better than what their training suggests they will. I was a racehorse in the past. I lived to race. The problem was getting me to the start line in one piece. If that could be done, I would run well. I sometimes even raced past what my body could manage. Perhaps this is part of the current fear, not wanting to destroy my body anymore. Running when one feels indestructible is worlds apart from running on the safe side. What used to be a sport about pushing my body to its limits has become an activity that must be done only to the point of what my body can manage. It's a different game all together. In terms of getting to the start line, there are so many ways to fuck up a race long before the gun goes off. Self sabotage is a common trend in people who seek some sort of perfection. Sometimes it's easier to have an excuse (I trained too many miles the day before, didn't eat right, didn't sleep etc) rather than do everything right and accept the outcome, good or bad.

Right now I have to get some rest. I have too much to do tomorrow, and it will end up being another day off work that won't actually feel like a day off at all. I think Easter is coming up on Sunday. I will end up working that day too, but hopefully for a few hours less if everyone goes to eat an early dinner of ham as planned. It is ham that people eat on Easter, isn't it? I forget. Even though my family wasn't religious, we still celebrated holidays. Easter was one of my favorite holidays, because, you guessed it, there was chocolate. Who doesn't like chocolate Easter eggs for breakfast? On that note, I might have to go get myself a chocolate bunny this year. As much as I would love to try the highly rated gourmet chocolate bunny by Jacques Torres or a more exotic bunny by Vosges, I'm thinking it will probably be this little guy from Lake Champlain: 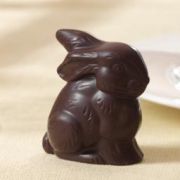