Well, I'm not sure if I can call that a race, but I will anyway. It was my first race in about a year. Because I know my foot has its limits, I opted for a 5K to test the waters. The Aids Walk/Run in Denver is one of those races that's kind of the opposite of the Pearl Street mile, where everyone is out to run hard and fast. Here, everyone was out to be supportive and run for a cause, which ended up being perfect for me. There wasn't a huge crowd, and people were generally nice, except for one snotty lady at the start. It figures that in a sea of sweet little bunny rabbits, I'd seek out the dragon. Well, whatever. I was feeling all insecure before the start, not knowing at all where to place myself- on the front line or WAAAAYYYY in the back, so I asked the lady I was standing next to what kind of pace she was expecting to run. That got me the big stink eye along with a smirk when she replied, "there's no pacing in this race," and then rolled her eyes at me. Her response was just fine, facial grimaces aside, but not at all what I asked. I said thank you, and moved forward to run with the boys. Jeez.

As far as the race? Well, I got through it. I forgot both how short and how long a 5K can be. The good news is that I had a fair amount of gas left at the end. I probably should have pushed it harder. My heart and lungs and even my legs were fine. My foot, on the other hand, was maxed out and hit its limit. Still, it held up OK. It was a little bit sore and stiff after the race. I got a little worried, but it seems better now. My tummy did fine during the race, but is gurgling and grumbling and making me run to the bathroom every few minutes. I'm not sure if it's nerves or something else, but I'll be glad when the waves in my stomach are calmer. Lunch is sitting OK, so that's good.

The course was awesome! I made a great move on the first big hill, and wish I would have kept that confidence and strength throughout the race. Unfortunately, I found myself drifting into a comfort zone several times. I was also overly aware of what my foot was doing. When I ran through the first mile in 7:39, I at first wanted to cry. Then I wanted to laugh, but in the end, I wanted to address Mercury and beg for some fucking turnover for my legs! While I was at it, asking Zeus to drop another big hill in the middle of the course would have been a good idea. Mile 2 was 14 something. Here's the thing though- I have no idea what my finish time was. My watch showed 21 something, but at the awards ceremony, they announced 1-3 in 21:05, 21:06 or whatever, and 3rd as 23 something. Either my time was way off and I completely tanked on that last mile, or something is screwy with the results. Oh! I forgot to add the funny part- as I was heading for the finish, with way too much energy left, there was a mascot who got on his knee and presented me with a rose. heh. It was cute, so I played into it, slowing down and thanking him.

Now, I know whatever I ran, whether it was 21 something or 23 something, it was slow. On the other hand, I had fun, and my foot held up OK. I have some fitness in there. I can sense that. I just have absolutely no sense of pace. My confidence needs a boost too. I'm thinking I should probably do some speed work once my foot is really ready for it. Mostly though, I can't wait to jump in a hill climb! I love racing. I can't wait until I'm in better shape. It was really fun. Of course I'm disappointed in my time. I'd love to run like I used to, and kick out under 6 min pace consistently. But considering all I have been through, I'm thrilled I got to both the start AND the finish line!

I'm not sure why I thought of this, but when I went to watch the pearl street mile, I saw a guy dressed up as Scooby Doo. I also saw a bumper sticker that said "What would Scooby do?" As far as running form goes, I would say I look more like Velma than Scooby. I need to work on the forward lean. Which one are you?


Argh- computer issues. Scooby doo with the gang image will have to wait. in the meantime, here's a link to it. Oh here we go, only now I can't comment! Grr. I'll have to wait until I get to another computer with less issues. Oy. 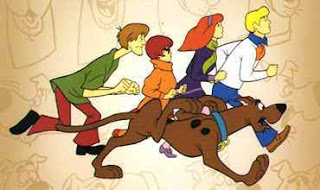