It's surprising how often there are big scandals in the food world. From white truffles being dyed black to strange ingredients being slipped into baby formula, scandal abounds. Recently, there were accusations that the milk used to make water buffalo mozzarella was being watered down with cow's milk. Since then, the Italian Minister for Agriculture has made efforts to ensure that all water buffalo cheese is being made with actual water buffalo milk. By the way, I would not want to be the one who milks one of these things: 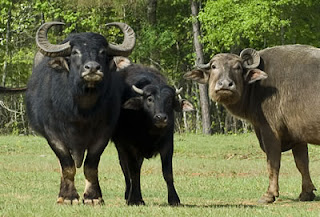 The water buffalo mozzarella is a cheese I have wanted to try for a long, long time. While I was wandering through the new Alfalfa's store, noting how easy it would be to spend a few valued body parts on both everyday and also gourmet items, I came upon the cheese section. I do believe a little ray of sunshine from the sky was shinning down on the amazing display. I was told there there are over 300 cheeses there, and, after catching sight of some of my favorite gourmet cheeses, my eyes stopped on the water buffalo mozzarella. It's horribly expensive, so I asked if I could purchase half of the large piece that was wrapped in saran and labeled. It wasn't a problem, so I walked out with a $5.00 piece that weighed about as much as a Chocolove bar.

I was curious to read a few reviews of this cheese, and I was very surprised to find one that mentioned it being stringy. It was anything but. If there was any cow milk in it, I couldn't tell, because it had a wonderfully rich texture and flavor, just what one would expect from the pure water buffalo milk. It has a bloomy rind, similar to what is found on Brie cheese. There's a very slight tang that's subtle enough to makes this cheese incredibly addicting. One wants to experience that flavor building on the palette at least a few times. To be honest, I could have eaten the whole piece in one sitting, but I refrained, simply because of the price. I would highly recommend it, despite the high price though. It was fantastic. Just a note that this is not the fresh mozzarella that most Italian restaurants use on bruschetta or in caprase. It is worlds apart. 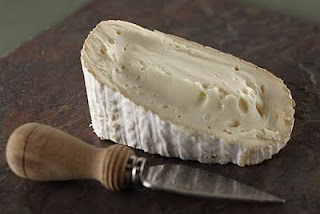 It's funny to be writing about cheese when there is so much on my mind lately. I once had an anonymous blog where I wrote about things that were a bit too personal. Baaaddd idea. For the most part, we are not on center stage, and others are more wrapped up in their own lives to pay much attention. Still, I'm making every attempt to avoid that here, despite how cathartic dumping in a public forum can be. I will say that I have recently learned some exceptionally hard lessons. The main one is that I can't change the way people view me- good, bad or indifferent. This one goes back to my dad whom I always felt didn't quite like me as well as others. It always made me feel bad about myself and made me think that most people wouldn't be able to like me in any genuine way. The eating disorder fit nicely with this kind of thinking. I somehow learned to cut my nose off to spite my face in the face of being hurt because of it, when that's the last thing I should be doing. So, for now, I felt like doing the opposite, splurging on an expensive piece of cheese, would be a step in the right direction. I should clarify that I continually find that I have people in my life I know 100 percent care. That has been a learning lesson as well. These are people who have an idea of who I am as a person, and I am so incredibly lucky to have them in my life. Life is hard, man. It helps to have some support through it.

Speaking of steps, I have had to cut back on the jogging after being scolded at PT. They're right. I was sooooo sore after that 20 minute jog! And it was more one sided too, which is a bad sign. Better to go back to jog walking for now. Running won't be too far off in the future. For now, the bike is calling my name. I do that first, so that I'm too tired to run after.