I have a weird relationship with chocolate. I wouldn't call it a love/hate one, because I definitely love it. It's more of a love but must proceed with caution type relationship. I know I already did a chocolate post earlier, but it's one of those topics I never tire of discussing, so here we go again.

It used to be that I could eat chocolate with no problem. Unfortunately, I have this heart valve leak, and the symptoms didn't present until I was in my thirties. I also developed the syndrome associated with mitral valve prolapse, so occasionally, it feels like I'm having a heart attack and my body is thrown into a physical panic attack, complete with heart palpitations, sweating and a feeling of impending doom-like I'm going to fucking die. I haven't had a big episode in a long time, but I'm generally careful to avoid all the things that could potentially trigger a reaction. Sometimes the episodes come on randomly though, and there's nothing I can really do about it, except try to remain calm, which is counter intuitive when your whole body is in fight or flight mode. I mentioned before, but when the doctor told me to give up chocolate to lessen the symptoms, I didn't do it right away. I continued to fight the panic attacks, until I finally decided they were too awful. I had to remind myself every time I got a chocolate craving that the chocolate wasn't worth the almost assured to follow panic attack, so sadly, I gave up my sweet treat cold turkey...for a little while anyway. Chocolate was my lovely melty tasty ball of kryptonite. I couldn't stay away, but it wrecked me. However, I found the solution was to eat just enough to satisfy the craving, but not enough to trigger any weird reaction in my body. Now I eat small quantities of chocolate, and it seems to be fine. Though lately I seem to be testing my limits with it a bit.

When I was in college, everyone on the cross country team knew I had a weakness for chocolate. I guess you could say I had a reputation of being a bit of a chocolate snob. I was challenged by a few of my friends to give it up for Lent. Though I'm not religious, I wasn't one to turn down a challenge, so despite others assuming I would fail, I accepted the dare. The day before I began this chocolate fast, I figured I would get one last chocolate hurrah! out of my system, and headed to a little cafe called Pour La France for some decadent chocolate torte and a cup of hot chocolate. All this really did was make my withdrawal the following day more extreme. Everyone told me I looked pale. It wasn't quite heroin withdrawal, but it obviously affected me. After about a week of avoiding all things containing cocoa, I found that a little caramel was a reasonable chocolate substitute. I managed just fine through Lent, despite a lingering feeling that something was missing. In the end, however, I was extremely glad when it was all over. I celebrated with a much toned down version of my last chocolate supper.

I guess growing up with a french mother, I never considered giving up small desserts, butter, cheese or bread. Despite being anorexic all those years, I only rarely, and never for extended periods, resorted to eliminating entire food groups too. My approach had always been to control portion size and run, a lot. A friend of mine who also suffered from anorexia years ago has similar philosophies around eating. Better to be satisfied, even if briefly, than munch on several stalks of celery and then eat what you were originally craving anyway. Neither of us gave up ice cream, even at our lowest weights. Eventually, when we were both stumbling down the road to recovery, the two of us would run together and joke about writing a diet book, because if anyone knows about losing weight, it's an anorexic, no? Then again, we didn't think telling people to eat the limited calories we did and run 5 miles would go over well or do much in terms of being inspirational to the average person trying to lose weight, so we let the idea drop.

Speaking of books, I saw the movie in its entirety, and I've read most of A Brief History of Time up to the point where black holes and all those universes are presented. I can't seem to force myself past that point, because it simply freaks me out to think about how small humans are in the scheme of things, and how vast space really is. There are times where my brain feels overwhelmed with thoughts of both the infinite and also thoughts of nothingness. It's easy to get caught in the daily trivial bullshit and the mundane as a way to avoid thoughts of death, disappointment, despair, suffering, heartache, tragedy and what seems to be the pointlessness of it all. No wonder my dad drank! So in an effort to have moments of feeling more grounded and secure, why not turn to sex, drugs, rock and roll or chocolate? I think when I ran, I felt I had a point.Without that, finding contentment wasn't easy. Of course I think of The Point, where even in a pointless forest, a point can be found. By the way, The Point was probably my favorite album ever growing up, and I remember carrying the record around with me, as if it were a toy. I guess there was something in either or both the music and the story that resonated with me. I was a depressed kid, and had thoughts of suicide at the age of four. Surprisingly, something like Harry Nilsson's creation made things a little easier to bear. But what I have found more recently is that having a point isn't necessary. In this country we are not often taught that's OK to just be. I think Oblio also found that a point wasn't needed, only he had a point in the end. hehe. Think about that for a while!

Enough reminiscing for now. I ate some chocolate at 4AM today, and expected to jump back into bed for a few more hours of sleep. Unfortunately, I had really weird dreams and woke up often. I eventually took a nap in the afternoon, and have had a big brain disconnect the entire day. I'm in a chocolate haze. Oh but sometimes it's just worth it. Sigh.

I heard from my agent. there were a few more kind and somewhat personal rejections from big publishers, which is nice rather than getting the standard rejection from letter. She has recently sent the manuscript to 15 more publishers, so I'm hoping this spring will be the time it gets picked up for publication. 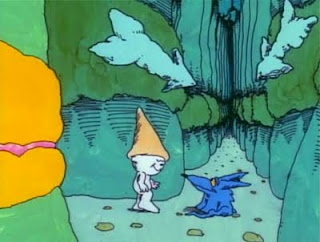 Oblio and Arrow in the Pointless Forest.
Posted by Lize Brittin at 10:19 PM