Dammit. I knew I would have to address this at some point. I think it's pretty obvious from some of my recent posts that I sometimes struggle with self esteem. It's funny, I have to be very "on" at work, ready to spit out information about anything from the over 500 different artists we carry to art history to even dumb things like which local restaurant is better for a quick bite. I can't do my job and not have some confidence in what I say and do. It's the same with workouts. I'm not running, but I have to have at least a little confidence to get through some of the hardcore bike workouts I've been doing. In certain situations, I can be fearless or at least face my fears. Ok, I'm rarely fearless, but it happens. Running I go back and forth on-sometimes having courage, and sometimes feeling it's all too much. The big thing lately is that I recognize how I view myself affects how I interact with everyone else.

The unfortunate trend in my life, aside from being constantly put down by others, was that probably because of this, I learned that I could never do anything right. In 2nd grade, my teacher told me I wasn't putting enough effort into spelling. I was dyslexic, but nobody knew at the time. I would spend hours trying to memorize words, and still do poorly on the test. What's worse is that even when I did well, I couldn't hear it. In my manuscript, I write about an incident where my high school coach was quoted as saying that he felt I could quite possibly be the best female mountain runner in the world at the time. This was just after I had won Pikes, and was getting ready for the upcoming cross country season. He also mentioned that I possibly could have gone faster, but I started out a bit too quickly in the race. All I got out of the article was that I blew the race. Big black and white, all or nothing thinking right there. The whole part about me being one of the best in the world didn't even register until I reread the article years and years later. And that's how I have gone through life- assuming people think the worst, likely because I haven't been very happy with myself.

I can't believe that it has taken me this long to both notice and now address these issues, but I also believe that conquering big life and death issues, spending countless hours on achieving whatever goals in life and being isolated most of the time can make recognizing how one interacts with others difficult. There was nothing to address as long as I didn't let anyone close to me, and I did a really good job of that. Hell, I still do. The big question is how to change, and, as I see it, I need to work on myself, especially since the surgery, which simply caused another big blow to the old self esteem meter. Having to rely on someone else is the last thing to promote confidence. It was the same thing after the viral meningitis. It took some time to get back to being comfortable interacting in the world. This is where I think talking to someone will be useful.

I do have moments where I acknowledge that I am basically a decent human being or at least try to be, but there are also times where I feel I've blown everything, just like the race. It's interesting that all this stuff has come up just after the surgery. I suppose it's kind of expected, because tossing me completely out of my comfort zone (really more my safety zone) and into some unbearably tough challenges will naturally bring shit to the surface, and having to face myself with nowhere to run (literally!) I am forced to address it. I really wish I could have done so earlier, but I think I have spent so much time and energy trying to keep some balance with the food and exercise, I forgot to check what was going on with the rest of my life. I sometimes expect others to call me out on things I should be recognizing in myself. Life doesn't work like that. And still my confidence is entangled in the running, which really was the only thing that ever gave me a sense of being OK in the world at one time.

It's easy to be consistent in love when it comes to animals, even when they fuck up royally and puke on or tear up your most expensive carpet. I wish I could be as forgiving toward myself and others, and step away from the self hatred that so easily rises. It doesn't matter to a dog if you don't say the right thing or do things just so, all that matters is that the leash gets brought out a few times a day and food goes in the bowl at the appropriate times. It seems so fucking easy. And their self confidence definitely doesn't seem to be wrapped up in their looks or achievements either. Another lesson to learn from them. Speaking of animals, I saw the most adorable puppy the other day. It looked right out of a dog food commercial. I actually found an image that looks similar, only the brown around the eye on the one I saw wasn't as pronounced, and it was on the opposite eye: 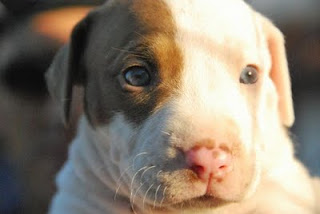 It's funny that when I was running so well I didn't have the confidence of a champion. If anything, it was a little bit the opposite. Today when I was attempting to run, I wondered what it would be like to race again. I'm so far from an actual run though. Still, I can feel that, the lingering surgery pain aside, my left foot is getting there. It will eventually change the entire way my foot lands. Last year I struggled to run two 7 minute miles with a short rest between. I'm embarrassed to admit that when under 6 minutes was my go to hard pace in my younger years. I know I'm fit on the bike, but I have no idea how fit. I know my heart rate on the bike, and if I could translate that to running, I'd be in good shape. However, biking and running are worlds apart. Then there's the confidence thing. Somehow, I will have to gain confidence with running again. First, however, I will have to merely run, and right now, my foot is not quite strong enough to do much. 5-20 min little jogs are all I am willing to do, because I don't want to end up with some other injury from the imbalance. Sigh. I just want to run, and I mean that in so many ways.

I've had a few more, "are you OK?" type questions thrown my way. I'm just sad. I'm not completely imploding or falling apart, I'm just fucking sad. I have to smile and be on top of things the majority of the time, so I guess I'm carrying it around somewhere. Still, I wish people would trust that I'm going to be fine. I have no intention of taking any big steps backward, no matter how upset I am with myself or any situation. As bad as things can be and seem to be, nothing is as bad as the hell I went through with the eating disorder. I will do whatever it takes to never go down that road again. That's all I can say about it. I will say that the meds help with my sleep a little bit, and I think that is a very good thing. And despite this feeling of wanting to cry quite a lot lately, the edge is still somehow softened.
Posted by Lize Brittin at 2:02 PM