I decided I need a change. After several people nagged me to go on match.com, I considered joining the e-dating scene and even started to create an account. It's just not me though, and I bailed before getting in too deep. For some reason, I can't bring myself to complete a profile, unless  I did it as a joke and filled it with all kinds of cynicism and sarcasm. Ultimately, that's not the kind of change I need. I do agree that I need to stop going down the same road with guys. My pattern of  jumping into these non-relationships that threaten to develop but never will needs to be broken. These situations don't make me feel good about myself. Maybe I'm not cut out for relationships, but I'm getting the strong urge to pull the plug on any daydreams anyway and focus on more important, real things: my writing, running, work and helping others. I'm fine with that. I guess in many ways, I always have been.

World records, especially of the Guinness variety, weird me out a little. I always wonder what makes someone think of attempting to accomplish these types of achievements. The one with the guy kicking himself in the head is one of the most confusing to me, as is the one with the man who put the most spoons on his body. There are plenty of other odd records, some like the largest gathering of people dressed as Mahatma Gandhi, that involve many people and some, like the longest unicycle ride on beer bottles, completed by a single person. Naturally, the guy who ran a marathon in flip flops made me scratch my head. What's scary is that he's fast. He ran a 2:46. Given all that's wrong with my foot, getting through my longest run since the surgery (anything over an hour is long at this point) was a HUGE deal yesterday, but I was running with tape around the injury and my feet were stuffed into heavy-duty training shoes. I can't even begin to imagine running even half that far in flimsy shoes. Running barefoot would probably be easier! It's bizarre. 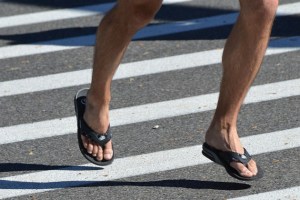 I have to face the fact that last week was a bit of a struggle to complete in terms of my training schedule. The long run I did was long, well, for me. I guess with a bit of a limp, the longer stuff is more difficult. I feel it more. It might be that I'm also not as fit as I would like to be. Running 1 hour 30 minutes seemed REALLY long though. The last 20 minutes were though, and I think I was whining a bit, even though I had slowed to a jog. Maybe the 30-minute tempo stuff in the middle made it harder, but I think I'm still not quite back on my feet fully. I'm getting close though. The down side of this dehydration episode, in addition to just being really, really sick for a week and a half, is that all of a sudden I'm terrified to race again. I wish I could find a low key mountain race somewhere close. Despite my worries, I'd like to attempt something in the next few weeks.

Sigh. Time to work on a proposal for a project I'm very excited about and will share soon.