My training schedule looks frightening this week. Actually, if the weather were like summer, I might feel better about tackling a few of these longer runs. I'm less motivated to run long when the trails are a muddy mess. It would help too if my foot didn't feel like electric eels were having a party in there. My doctor appointment isn't until the 15th, so I have to manage as well as I can until then. Let's hope tape and determination can get me through these next few weeks. 1st run done today. Relief. Of course, if people knew that long to me is an hour, it might make them realize the schedule isn't anything outrageous. It's more that I'm worried about my foot and my energy lately. My eye is still twitching. Perhaps for Wednesday's celebrations I could go as a mental patient or the chief inspector in the Pink Panther.

In more terrifying news, the frankenstorm aside, the store where I work is participating in the Downtown Boulder Munchkin Masquerade on Wednesday. What a horror fest. A million kids and their parents go door to door to all the businesses on the Pearl Street Mall, grabbing candy as they go. Yes, many of the kids are cute, and, generally speaking, people are well behaved. Unfortunately, there are always a few bullies, usually adults, who act in ways that make my stomach turn: taking more than their fair share, butting in line or shoving the little ones aside to get to the Hershey's Miniatures first. Two years ago, a parent stuck her grubby hand in the bowl of candy I was holding and snatched quite a few goodies that were meant for the kids. When I confronted her, she said something about getting candy for kids who weren't there. Then she rushed off with no intention of continuing to Trick or Treat for these phantom children. Say hello to the 10 kids you have, liar. I might have believed her story more if she hadn't been unwrapping a piece as she rushed away in her witch costume. When I was little, Halloween didn't work like that.

These days, and I'm sure this happens more in Boulder than anywhere else, kids have become more picky about the kind of candy they receive. While true gluten allergies are rare, everyone in Boulder claims to be gluten intolerant, even the youngsters. While I would never say, "Here kid; have a Kit Kat. Live dangerously," and toss some candy into his bag, I am annoyed that people expect me to look at labels. Isn't that the parents' job? A few years ago, some lady told her kid to ask me for gluten-free candy. With thousands of pieces purchased to put in the basket I was holding, I wasn't about to go searching for one. I shrugged my shoulders, lowered the basket full of candy to his level and told him he could take a look. By the way, all you vegans out there who are claiming this recipe is so much better for you than anything else, because it doesn't contain gelatine, look closely at the amount of sugar and other sweeteners (and not much else) in it:
Candy CornIngredients:1 cup sugar2/3 cup organic corn syrup agave nectar, or honey5 tablespoons Earth Balance1 teaspoon vanilla extract2 1/2 cups powdered sugar1/3 cup powdered soy milka pinch of saltRed & yellow food coloring

I think candy in small quantities is fine, but don't pretend that these little treats are all that much better than a fucking pixie stick.


Ooooo a bit of a tangent here: I tried some Picky Bars and have to say that I really like them! They sit really well on my sometimes fussy tummy.

Boulder has changed. I was born and grew up here. When I was a kid, my friends and I went around the neighborhood and didn't have to worry about anyone sticking a razor blade in a Tootsie Roll, because the loot was given out by familiar people. Our parents went through the candy we got anyway and threw out anything that looked even remotely suspicious. A wrapper that wasn't perfectly in place caused alarm, and into the trash can that potentially lethal piece went. I suppose the Munchkin event is to provide a safer place for kids to parade in costume. Somehow all it does for me is confirm what a creepy holiday Halloween has become. I say this wishing it still had at least a little something to do with festivals of the dead and the harvest. Today it's all about consumption and being slutty. Yes, Halloween, the perfect excuse for women to dress like sluts and then complain when we all get treated like objects in society. Don't get me wrong, I have no problem with people showing skin. I do have a big problem with costumes that look like something Fascinations would sell designed for little girls. I have to wonder what parent thinks it's OK for his or her daughter to dress up as a chamber maid, but it happens. People spend more and more (several billion dollars this year) each year on Halloween costumes, which seems strange as less material is used every year. But enough complaining about the holiday. If people think that slutting up Mr. Potato Head is a good thing, there's not a whole lot I can do about it. Damn though, even ghost costumes have gone wrong: 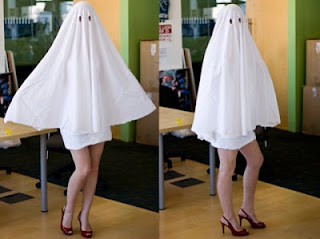 I forgot to go into my asking for needs to be met topic. That will have to wait.

Wednesday will be a double dose of scary, as American Horror Story will be on again. It's really a great show, but I hate that I freak myself out watching it. 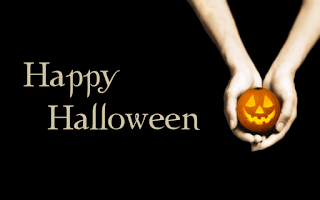 I hope everyone on the East Coast stays safe in the wild storm.
Posted by Lize Brittin at 6:15 PM