I was so excited about finishing the manuscript and getting it uploaded to smashwords yesterday that I skipped over writing a real blog post about it. Before I get into it, let me say that I decided to publish on Smashwords, because it's easy to download material from that site. E-readers aren't even necessary, so if you don't have a reading device, you can download the book in HTML format using your computer. I believe that in the free sample, Lorraine Moller's foreword is visible.

I also have to blurt out that my neighbor just won the Nobel Prize in physics. How crazy cool is that?!?

This has been a long, long process, taking over six years to complete. It was with the help of many people that I was able to finish this project. I'm sure I could have put my story out there in the early stages, but without people helping me and pushing me as a writer, it wouldn't have been complete. I needed the time to grow and recover from my illness more, so that I could offer what I learned to others. I hope this doesn't seem like a super sappy post, but there are a few people I want to thank publicly, even though they are also mentioned in the acknowledgements.

I mention Diane Israel, Bobby McGee and Lorraine Moller quite a bit in this blog, but there were other people who played an integral part in getting Training on Empty published.

When I first wrote my manuscript, it was more like a little novelette, no more than 25,000 words. I submitted it to an agent who said that she liked it. Seeing that there was an important message there, she told me to rewrite it and make it longer. It had to be at least twice as long. I wasn't really a writer at the time, but I knew I had something important to say. There's a saying about stories happening only to those who can tell them, but I believe we all have stories to tell. We just tell them in different ways. My agent suggested that, rather than go chronologically, I should start at a dramatic point in my life and work around that. She also encouraged me to take a more global approach to the whole book. It took me a year to gather interviews and rework the story to make it better. I thought I was done, but it was still in the early stages. It would take a few more years of rewriting and editing before it was finished. Quite a few people read early versions and offered suggestions that were all very much appreciated. It is a very different book now.

My first big change after the initial rewrite came when I was introduced to Julie Threlkeld (http://raceslikeagirl.com/), a fellow blogger and runner who offered to edit parts of my manuscript. She was the first person who really helped me get a better sense of what was lacking. Julie has a way with words, so her suggestions were crucial in making my story richer and more complete. Sometimes when writing, I forget that brushing over tiny details will leave the reader confused. I've tried to remember that not everyone is in my head. Julie's comments and advice made me realize that I had a long way to go before I could consider myself a writer, but she encouraged me to keep at it. I think people could see that there was a story that needed to be shared. It needed work though.

This quote from Stephen King's book On Writing, which I have not yet read, comes to mind when thinking about editors:

"The editor is always right." The corollary is that no writer will take all of this or her editor’s advice; for all have sinned and fallen short of editorial perfection. Put another way, to write is human, to edit is divine."

It was actually Kevin Beck (http://chimprefuge.com/) who introduced me to Julie. He also took the time to give my final draft the last revisions it needed. Most writers know that it takes great editing to make a written piece the best it can be. I suppose it's similar to a painter having her art framed. A frame can make or break a painting. The thing about writing is that sometimes in getting the story out, it's difficult to concentrate on proper grammar and structure, so editors read through and catch these mistakes. I have laughed at the little errors I've made when going over what I've written with fresh eyes or when an editor points out a slip a typical third grader would make. I have stubbornly fought with my editors, knowing full well which words were better or more accurate. Clearly I need to work on having less attachments to my work. In some cases, it was a struggle to change things that obviously needed changing. Unlike my artist friend who is fearless with his work and can boldly alter a piece that looks nearly flawless to me, attacking it with new colors on his brush, I guard my work and hesitate with each correction.

The other night, I was fussing about keeping a passage in my words, knowing it was better if I took my editor's advice. I started to get in a huff about it, but the more we argued, the more I realized how silly I was being. After a bit of embarrassment at my stubbornness, understanding that I was arguing simply to have it my way, I agreed it needed changing. The crazy thing was that it was a minor revision, and I was determined to have control, until I started laughing about what an ass I was being and relented. As I have stated more than a few times, letting go isn't always easy for me. I don't envy my editors.

I'm forever grateful to these two editors and the others who helped push me in my writing career. Ultimately, this book was published, because I believe that it has the potential to help those who struggle with addiction, body image issues or eating disorders. Sometimes with athletes, the line between being compulsive and being dedicated is a fine one. The more we can teach young girls and boys self-acceptance and self-confidence, the better the chance that these issues will be avoided or addressed early.


Thank you to those of you who have already purchased Training on Empty. 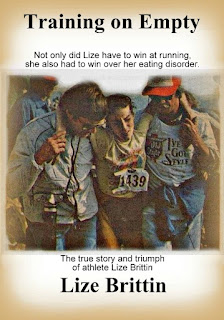