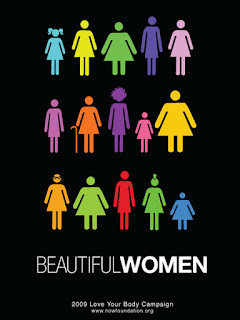 I'm posting a picture of one of the love your body campaign posters featuring images of beautiful women, knowing full well that men often struggle with body image and should love their bodies too. I didn't find out until today that it's love your body day. I wish I had known earlier, because I like the concept behind the celebration: moving away from advertising that tries to make people feel inadequate. I would have put together a more well thought out post had I known. The campaign is geared toward woman, who are often more unsatisfied with their bodies then men, but we are all bombarded with negative advertising and forced to believe that only buying a certain product will make us attractive, desirable and successful. Today is a good day to pledge to appreciate your body now and in the days to come.


I haven't had a clear enough head to write much. I wanted to add a quick note to thank those of you who have reposted info about my book. I really appreciate it. It looks like a few online magazines might eventually do some reviews, which is fantastic and very exciting. I mentioned before that getting Training On Empty out there has been a LONG process. Hopefully it will help those who might be struggling.

Oddly enough, I am not allowed to mention my book on any eating disorder forums, except on facebook. I can't even post in the book section. I'm not sure why there is a book section in this one forum, unless it's strictly for the use of the moderators. There doesn't seem to be a ton of traffic in there anyway, but it's still the very group I'm trying so desperately to reach. On the other hand, the eating disorder recovery groups on facebook are a different story and totally cool about people posting info about books.

I have found that even as much as I have recovered, I can so relate to some of the issues brought up in these recovery groups. During the beginning stages of my attempt to get well, I had to completely remove myself from anyone and anything related to eating issues. I couldn't go to support groups or read about anyone else struggling without being triggered in some way. It's good to be in a place now where I feel like I can offer something and not be afraid of slipping.

I'm going to cut this a bit short. I want to catch the season premiere of American Horror Story, even though I know it will completely freak me out and probably cause me to have nightmares. I scare so easily it's stupid, yet I can't resist that show.