The 40th Anniversary of Title IX 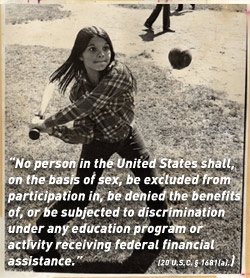 Title IX is part of the Equal Opportunity in Education Act. Basically it is a piece of very important legislation that bans sex discrimination in schools. It states, "No person in the U.S. shall, on the basis of sex be excluded from participation in, or denied the benefits of, or be subjected to discrimination under any educational program or activity receiving federal aid." Though it may not be obvious, this applies to sports as well as academics.

Even though the Civil Rights Act originated in 1964, it wasn't until 1967 that discrimination specifically against women was addressed. Many critical things happened for women in 1967, the year I was born: Katherine Switzer ran the Boston marathon, NOW persuaded president Johsnson to include women in the executive orders that were brought about in an effort to clarify the Civil Rights Act, and groups of second wave feminists were suddenly forming and more visible than ever before. Also that year, the ERA was first proposed but never actually adopted, failing to receive the required number of ratifications. Still, it's important that it was even considered. While I tend to focus on sports and eating issues in this blog, it's worth noting that Title IX directly relates to the Equal Opportunity in Education Act. Without first tackling discrimination in education, in some cases addressing women being excluded from attending certain schools, we wouldn't have eventually been allowed equal opportunities in athletics as well.

Obviously, having title IX in place was a benefit to me. I was able to run on teams in both high school and college. Not only that, I was able to go to school on an athletic scholarship for running. My niece, a stand out tennis player, will likely play tennis when she attends college in the fall. Some claim that title IX is hurting programs for men, but this clearly wasn't the intention of those pushing for equality. What's really happening is that more money (sometimes up to 78%) is pumped into the bigger sports like men's football and basketball, so lesser men's sports are, indeed, being squeezed out in order to comply with title IX. However, when one looks at it this way, it's not exactly the equality of women that's driving the men's lesser sports away, it's the unequal distribution of money in men's sports in general. Does this make sense? It does to me. Donna Lopiano, president of Sports Management Resources, offers her thoughts, "the only answer is to stop this damn arms race in football and men's basketball, and there's a lack of will on the part of colleges and universities to do it." A few of her solutions included: "reducing the number of football scholarships Division I schools are allowed to give out, or exempting the NCAA from antitrust laws so that it could more effectively cap expenditures like coaches' salaries."

Back in January, I created a post for NGWSD, explaining why I feel sports are so important to young girls and women. Here is the link to that: http://trainingonempty.blogspot.com/2012/01/ngwsd.html

The following video is far better than the mess of inaccurate bits of information John Stossel has attempted to report on Title IX. He appears to have misunderstood what Title IX actually says. Maybe he should have read this article before opening his mouth. In short, one must provide the same opportunities (in terms of support, funding and resources) for the under represented gender (usually, but not always women) at schools and universities that receive federal funds. Maybe he was trying to be funny, but insisting that Title IX hurts men's sports or isn't needed is about as truthful as claiming The Human Centipede is medically accurate. Yeah, so is a head transplant. I am ever grateful that title IX is in place.