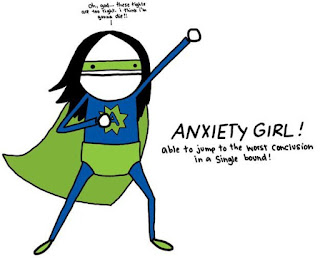 I'm struggling with this word more than any other, which is odd considering that it fits so well into my life right now. I'm talking about the first of the following definitions:

1. to disturb the mental calm and contentment of; worry;distress; agitate.

2. to put to inconvenience, exertion, pains, or the like: May Itrouble you to shut the door?

3. to cause bodily pain, discomfort, or disorder to; afflict: to betroubled by arthritis.

4. to annoy, vex, or bother: Don't trouble her with pettycomplaints now.

5. to disturb, agitate, or stir up so as to make turbid, as wateror wine: A heavy gale troubled the ocean waters.

Instead of getting into all the reasons my mental calm or contentment is being replaced by worry and distress, I will switch directions and focus instead on signs of trouble.

There are people who believe that once an anorexic, always an anorexic. I don't agree. I don't deny that anyone with anorexic tendencies should always remain aware, but I know embracing a different life is possible. It comes down to choice. When I begin to feel my world slide, and I know I'm struggling to keep my head above the rapids that are sucking me under, I have a choice to escape into disordered eating or face what is uncomfortable. We aren't taught to do the latter in this country. You don't often see Americans wailing at a funeral or sobbing in the street. Everyone has to hold their shit together and with a smile too! Occasionally I let my guard down, which is a good thing. The perfect example of this occurred several years ago when my cat, Shelbie, died. In typical Lize fashion, I tried to shove down my emotions and go about all I needed to do as if nothing happened, even with this great lump of sorrow in my chest. So, after a short grieving period, I attempted a run from Chautauqua Park, as it was on my training schedule. After about 10 steps up the first hill, I slowed to a walk. Then, when I still couldn't seem to catch my breath, I stopped and cried in the middle of the trail. A lady walking her dog came up to me and asked if I was OK. I explained that my little Shelbie, a cat I adored, was gone, and without hesitation, she threw her arms around me and let me weep on her shoulder. While I was somewhat embarrassed at my inability to contain my emotions, I knew she understood. I was so incredibly grateful for her kindness. She insisted I go home and take care of myself, so I followed this stranger's advice and did just that. Somehow it helps to have someone to cry to, though shedding tears alone works too.

Situations like the above can be the hardest times to take care, because overwhelming emotions can seem endless and scary. It's easy to want to numb out and retreat, and that can lead to trouble. Sometimes it's not one big explosion of emotion but many small issues that can add up to feeling overwhelmed. Unfortunately, the world doesn't stop to allow us to grieve, process or weather our own emotions. Most of us have to keep going and get through the day, go to work, engage with others and be a part of the world. I find that lately I've been crying in my sleep, probably because I don't have time or a place to do it during the day. I suppose it's better than holding it in entirely, and I am very aware that the tremendous fatigue I'm experiencing is probably depression more than anything else. There are quite a lot of changes taking place in my world over the last month or so. What's important is that I keep taking care of myself as much as possible, even though I'm to the point where I feel like it's taking great effort to do so. When I get really down in it, even little things like taking a shower can be a huge chore. That's when I know I'm on the edge of getting into trouble. It's when apathy sets in and I start to care less about everything but sleep that I need to be ultra careful, so that I don't slip. For me, it's all about awareness and finding solutions. I know some of the emotions I have to experience right now just plain suck, but I also know that they will, at some point, pass.

I've mentioned it before, but when things feel out of sorts, it helps to HALT and ask yourself if you are any of the following:

Of course, I will add sad/depressed, injured and afraid to that list, but then it spells HALTSDIA. Anyway, defining and describing what we are feeling can help diffuse the emotion.


It has been a really, really, really long day, so I'm cutting this short and leaving without any real conclusion. I still have quite a lot to do before I can attempt to get some sleep.

I'll toss in a quote I found recently that I like that may or may not relate to the topic.


"Ninety percent of the world's woe comes from people not knowing themselves, their abilities, their frailties, and even their real virtues. Most of us go almost all the way through life as complete strangers to ourselves." - Sydney J Harris