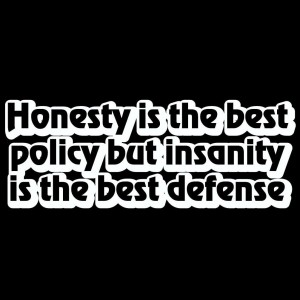 Honesty was probably the biggest factor in my recovery from anorexia. I've heard others who are on the other side of addiction state the same thing. It's impossible to address issues and face problems if you're lying to yourself or others that there's anything wrong. What I found, as I waded deeper and deeper into my illness, is that it got easier to fool myself while it became more obvious to everyone else around me that something was amiss in my life. I suppose on some level I was aware that I wasn't pulling the wool over anyone's eyes, but it didn't stop me from rationalizing and attempting to explain away my disorder. Watching others who are sick (where I once was) pull the same kind of stunts is a frustrating position, yet I understand it. Stretching the truth in these cases is fear based. There's such a strong need to hang on to the illness (because it's a coping mechanism and more) that little lies become the norm. It's much like an alcoholic with slurred speech claiming he hasn't been drinking. Obviously nobody is being fooled, but slipping and engaging in addictive behavior is a difficult thing to admit.

It wasn't until I was in the hospital being treated for my eating disorder that I started to realize how important the truth, mostly being honest with myself, was to recovery. One of the nurses, a former bulimic, who helped run the program asked all the patients how honest we were with ourselves. I realized that I hadn't always been very straight with both myself or those around me. Anorexia is a tricky beast though. It can quite easily fool the mind into skipping a meal here and there or cutting back on calories a little bit. The line between reality and the fantasy addiction creates can get a little fuzzy. Knowing this, I made a dedication to take this nurse's advice and be as truthful as possible. On my mission, some said I became honest to a fault. People still say that about me, though I struggle with the idea that avoiding lies can be considered a fault, and I'm far from perfect in this department. I only know I do make a great effort and also feel really crummy when I have slipped. However, over the years I discovered that sometimes keeping quiet and not throwing every frank opinion out there is a healthier way to live. Because I don't want to hurt anyone, I found that there are hundreds of ways to say something while remaining genuine. In other words, I was and continue to be careful with my words. With some radically honest people, sometimes they come off as concerned only about their needs instead of what might be best for everyone involved. It can be hard to balance being authentic with not hurting people's feelings. I get holding back the truth in order to protect someone. What I will never, ever understand are those who lie in order to torment other people or to get attention.

When I relapsed hard in my late 20s and fell more fully into my sickness, I was still making an effort to remain at least partially truthful. I was very aware and pretty upfront about my issues with food and my body image problems, though I did trip over those rationalizations and explanations again. It would take a few years before I could put it all together and get back to looking at myself accurately. Somehow, understanding the disorder intellectually didn't translate to taking steps I needed to become well. Until I could really take stock of what was going on with me and understand why I was behaving the way I was, I would stay stuck in the nightmare I had created. It's amazing how a commitment to staying honest can shift perspective and lead to self-awareness. I have seen how the guilt that comes with attempting to hide aspects of an illness or addiction can drive a person further into the disorder. It's hard to have self-respect both when lying and engaging in disordered behaviors. The situation can quickly become a vicious cycle. However, it's important to remove any stigma around eating disorders and other mental illnesses and open the doors of communication, so that people feel OK when talking about their problems. In this way, we not only come to a better understanding of why illnesses and addictions occur but are also more easily held accountable for our actions toward recovery.

One word of caution when it comes to honesty, and I had to learn this by trial and error. Not everyone wants to hear every detail of your illness or your recovery. It can be difficult to find balance between not saying anything and saying too much. It helps to have honest people around you who can lovingly guide you and tell you when talking about your issues gets to be overwhelming. Initially, because I had kept too quiet and was embarrassed about my illness, I didn't talk about it much. Then, the pendulum swung the other way, and I ended up probably sharing a little too much with too many people. I was lucky that I had people in my life who could give me advice without offending me. Ultimately, especially in the beginning stages of recovery, it's probably better to err on the side of saying too much than too little, because sharing is a crucial  part of getting well. It can be helpful to find a support group or therapist, because these people are used to dealing with heavy issues and understand the importance of telling your story. Group meetings and therapy sessions are safe places to open up, and one doesn't have to worry about saying too much in these settings.